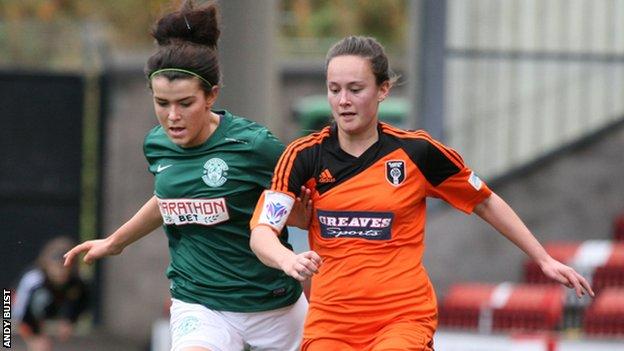 The top-of-the-table match between Glasgow City and Hibernian lived up to its billing with a 3-3 draw in the Scottish Women's Professional league.

City led the Edinburgh side 3-2 in the final stages but were pegged back by Cheryl McCulloch's late own-goal.

Forfar and Stirling drew 2-2, there was a goal apiece for Hearts and Hamilton and Hutchison Vale beat Inverness 2-1.

The young Hibs side made a bright and energetic start to the match, but the first goal of the game arrived after 23 minutes for City.

Erin Cuthbert laid the ball into the path of Hayley Lauder who instinctively fired an exquisite shot beyond Hibs goalkeeper Jenna Fife.

Hibs responded well and flooded players forward in an attempt to restore parity, and after 28 minutes they were back on level terms when a hard and low shot by Heather Richards skidded off the rain-sodden pitch and beyond the despairing Lee Alexander.

The momentum was now with the Edinburgh side and they moved in front six minutes before half-time when a run and shot from Lizzie Arnot appeared to be deflected into the net.

The second-half was just two minutes old when City equalised. Abbi Grant did well to win possession before Fiona Brown stormed through the Hibs defence and unleashed an unstoppable right-foot shot that skimmed off the woodwork and into the net.

City now had fresh impetus and they took the lead for the second time when Kerry Montgomery found substitute Susan Fairlie in space, and the forward drilled a low and teasing ball across the box which was duly diverted into the net by Brown at full stretch.

Six minutes from the end Hibs squandered a glorious chance. An inviting cross from Chloe Arthur found the unmarked Abbi Harrison, but her volleyed effort hit the base of the post.

Hibs were not disheartened though, and they managed a dramatic late equaliser with three minutes left. A barnstorming run and low cross by the impressive Richards was diverted into the net by City's McCulloch and the visitors had the goal they craved.

A frustrated City head coach Eddie Wolecki Black felt his team should have held on for an important three points.

He said: "It is a disappointed dressing room today knowing they have blown the win with just a few minutes to go."