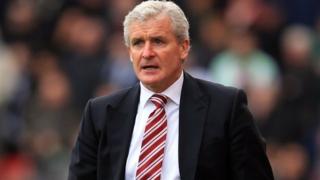 Stoke, already guaranteed to finish ninth in the top flight for the second season running, will be embarking on their eight successive season in the Premier League come 8 August - but Hughes hopes to get all his summer transfer business done by the time the players report back for pre-season in early July.

"It's not easy to get players over the line," he told BBC Radio Stoke. "A lot of conversations have to take place. But we're now viewed in a different light.

"Players' representatives view us as a viable option now, which is encouraging. We get a lot more choice of players than we've had in the past."