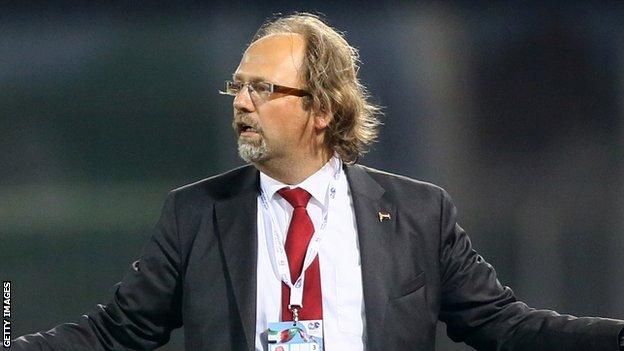 Belgian coach Tom Saintfiet is set to take charge of the Togo national team on a two-year contract.

He is due to sign on 1 June, just a week before the Hawks take on Ghana in an international friendly.

Togo then begin their 2017 Africa Cup of Nations qualifying campaign at home to Liberia on 13 June.

Saintfiet has already named a provisional 30-man squad, including striker Emmanuel Adebayor, for the upcoming matches.

The former Ethiopia, Namibia and Malawi coach will be assisted by former Togo captain Abalo Dosseh.

Saintfiet was an caretaker coach for Togo's friendly draw with Mauritius in March.

"We have decided in collaboration with the ministry of sports to renew our confidence in Tom Saintfiet," Antoine Folly, the head of the Togo Football Federation's normalisation committee, said.

"We have also decided for the first time in the country's football history to sign contracts with a real technical team composed of a head coach and his assistant as well as medical staff.

"In the past it is only the head coach who was on a contract. Now we have decided to improve the situation."

Togo have been without a coach since Tchakala Tchanile's contract expired last year after the Hawks failed to qualify for the 2015 Nations Cup.