"The lottery of the play-offs." A familiar phrase that is often bandied about at this time of the season.

This year, like every year since 1987, six teams will battle it out in their respective division's play-off final for a chance of promotion.

BBC Sport takes a look at some of the stories behind the headlines before this weekend's Wembley finals.

Midfielder Michael Timlin is set to face Wycombe at Wembley after producing the "bravest" performance manager Phil Brown had ever seen to help Southend get to Wembley.

And it was all thanks to a £5 rugby scrum cap from a well known sports shop.

The 30-year-old, who scored the clinching goal in the second leg of the Shrimpers' play-off semi-final win over Stevenage, needed 15 stitches in a head wound sustained in a clash with Boro's Bira Dembele during the first leg just four days earlier.

After being told he would need to protect his sizeable wound to play in the second leg at Roots Hall, Timlin headed into his local shop determined to acquire headwear akin to Chelsea goalkeeper Petr Cech.

"The physio said that, for me to play, I needed to get the swelling down and if I was in a position to play I'd have to cover it up as best as I could and go down the route of wearing something protective," he told BBC Sport.

"On Tuesday on the way home, I went into the local shop and bought a cheap scrum cap.

"I also ordered two expensive ones online to get them delivered on the Thursday but the cheaper one was far better."

Despite the risks of heading into aerial challenges and reopening his wound, Timlin, who has made 160 appearances for Southend, said he held no fears of playing to the limit.

He continued: "I was never concerned about thinking 'what if it opens up again?'

"I remember going for headers and others saying to me 'if you don't have to go for them, don't go for them', but that's not the sort of player I am.

"I felt very relieved that I played quite well as I knew there was going to be a lot of talk about me.

"I don't seem to score many but scoring - and in particular the type of goal I scored - was such a big boost for myself and it gave the team a massive boost going into the final."

Wretched would be a mild way to describe Preston's play-off record; nine campaigns have borne nine failures, stretching back to 1989.

Their long-suffering fans bear the scars and it is not surprising as they have got used to watching other teams celebrate at their expense.

In the past 13 months, North End supporters have witnessed pitch invasions at Brentford, Crewe, Rotherham and Colchester, as well as watching Walsall party after losing to them in the Johnstone's Paint Trophy northern final.

"Records are there to be broken," said Preston boss Simon Grayson.

"The first leg of the play-offs against Chesterfield was the first time we had won an away tie, so that record went out of the window."

When Preston lost at Colchester on the final day of this season, allowing MK Dons to pip them to automatic promotion, the prospect of another three games was masochistic.

"Hopefully we dismiss the hoodoo of the play-offs," continued Grayson, who had the Wembley pitch dimensions marked out to train on at Deepdale.

"There is anticipation and nervousness amongst the supporters - as there will be at Swindon as well - because it is a one-game season with the massive carrot of getting into the Championship."

Perhaps pessimistic fans can take solace in the man at the helm. Manager Grayson has got every club he has ever managed out of League One.

He led Blackpool to play-off success in 2007, guided Leeds to automatic promotion three years later and in 2012, he managed Huddersfield to a dramatic penalty shoot-out victory in their play-off final against Sheffield United to achieve the third promotion of his career.

"He obviously knows what preparation to do to get the lads in the right frame of mind," said former Preston captain Paul McKenna, who was part of five unsuccessful play-off campaigns during 13 years with the club. 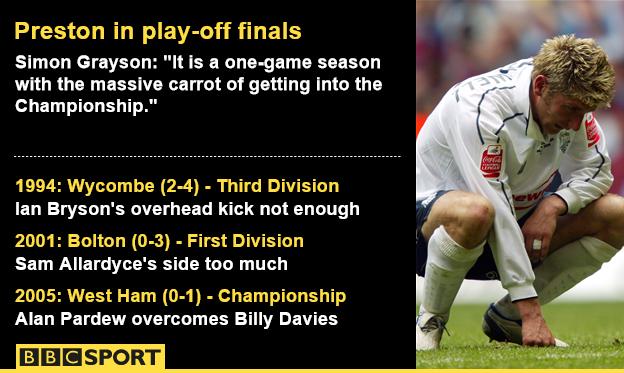 "He's obviously got a formula that works and hopefully he'll do that with Preston this week and it will rub off on Sunday.

"I think this time it is going to be different. Preston have got a manager with plenty of experience and going into this I would class them as favourites.

"Obviously everyone at the club wants success and the record is kind of a monkey on your back.

"Each time you go into it, you go in thinking 'this time is going to be the year', just as I'm sure everyone involved with the club is this time."

Mourinho's protege v The 'Unknown One'

Monday's Championship play-off final between Middlesbrough and Norwich sees two managers who were unheralded in England 18 months ago go head-to-head in the battle for a £120m windfall and a Premier League place.

Boro turned to Spaniard Aitor Karanka to replace club legend Tony Mowbray in November 2013 with the team only five points above the relegation zone.

But the turnaround under the 41-year-old, who was Chelsea boss Jose Mourinho's assistant at Real Madrid, has been remarkable.

In his first full season in charge, Boro finished fourth in the table, conceding only 37 goals and keeping a division-leading 21 clean sheets. 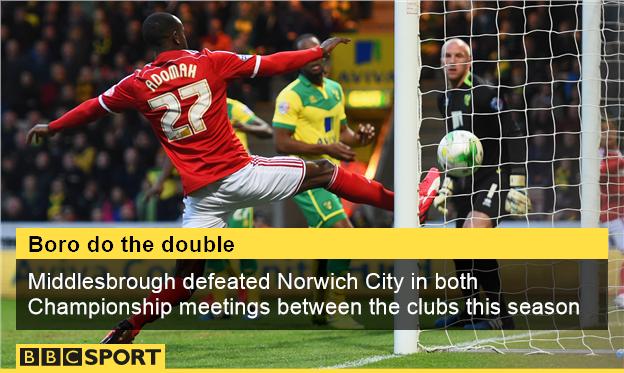 "Aitor Karanka has had a huge impact on Middlesbrough since his appointment," said Mark Drury of BBC Tees.

"He inherited a side 16th in the Championship, with some good players struggling for direction at the end of Tony Mowbray's three-year reign.

"Karanka immediately introduced double training sessions and demanded the highest of standards from his charges.

"If he has learned one thing from his time as Mourinho's assistant, it is that the team comes first, second and last. He has no time for individuals who put themselves above the collective.

"He might claim to be surprised to have reached the Championship play-off final in his first full season, but don't be fooled, he'll expect to win it." 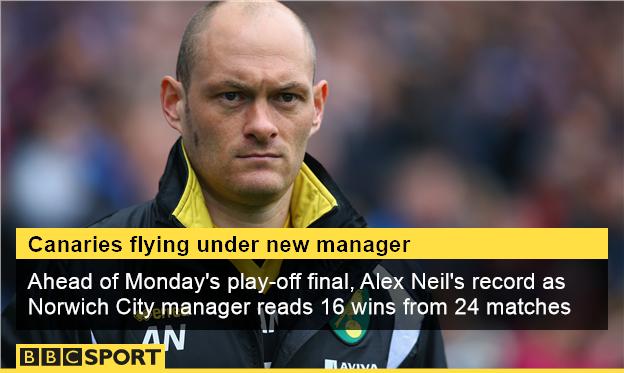 Karanka's counterpart on Monday will be Norwich boss Alex Neil, who was equally relatively unknown at the time of his appointment.

The 33-year-old led Hamilton to promotion to the Scottish Premiership via the play-offs last season and was handed the task of ensuring Norwich finished in the top six when he took over from Neil Adams in January.

The Canaries have won 16 of their 24 matches under the former midfielder and they were in the battle for automatic promotion until the penultimate weekend of the season.

"Few had heard of Neil when he suddenly became the bookies' favourite to take the vacant Carrow Road job," said BBC Radio Norfolk's Chris Goreham. "He has already become the first man to lead the Canaries to Wembley since Ken Brown's side won the Milk Cup in 1985.

"He took over a squad with undoubted potential, and a fair helping of Premier League experience, but was floundering after a promising start to the Championship season under Neil Adams.

"The fact he has not lost an away game as Norwich City manager speaks volumes for a man who prides himself on meticulous planning and attention to details."