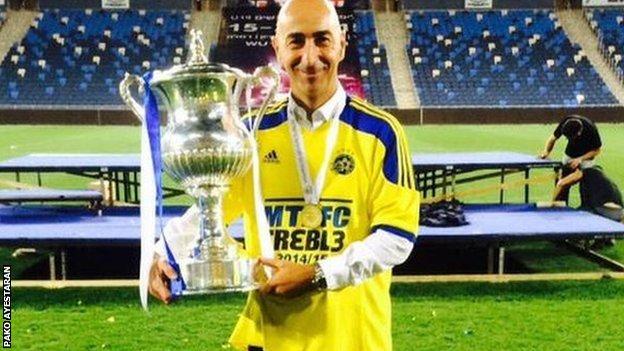 While trophy-less Liverpool look at a bare cupboard for another season, a former assistant has just landed a remarkable domestic league treble.

Spaniard Pako Ayestaran, who was Rafael Benitez's right-hand man between 2004 and 2007, has led Israeli side Maccabi Tel Aviv to the league title, the Toto Cup and, on Wednesday night, the Israeli State Cup with a 6-2 win over Hapoel Beersheba.

Despite great success this season, Ayestaran, who was an assistant at Tenerife, Valencia and Benfica, refused to confirm whether he would remain in charge of the club.

He said: "I can't think about next season, I just want to enjoy this victory."

Maccabi, founded in 1905, are the oldest and most decorated club in Israeli football.

In recent years, Canadian owner Mitch Goldhar and a predominantly Spanish coaching staff, led by sports director Jordi Cruyff, have helped transform a club who, until 2013, had gone 10 years without a league title.