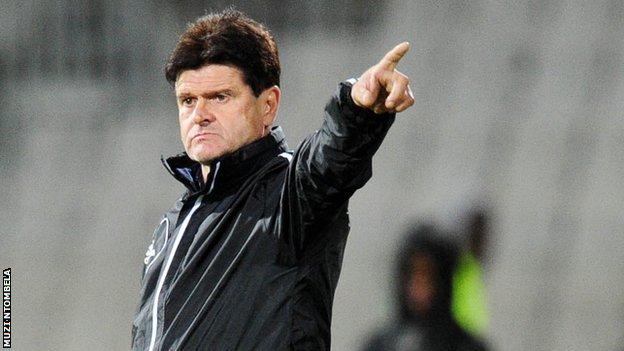 Mauritius coach Didier Six has been banned from the rest of the Cosafa Cup and fined $2,000 for poor behaviour.

The Frenchman, only months into the job, was sent off during his side's 2-0 defeat by Namibia on Tuesday.

That followed a warning over his refusal to talk to media after a 2-0 loss to Zimbabwe in their opener.

Also, Cosafa officials said Six had "thrown a tantrum" at a pre-tournament meeting over the non-registration of two of his players.

The 60-year-old appeared in front of a disciplinary committee on Thursday - the first time of such a hearing in tournament history.

Cosafa general-secretary Sue Destombes said: "We are disappointed in his behaviour, his general attitude and conduct was not what can be expected of an experienced and senior coach. Cosafa will not tolerate this sort of behaviour."

Six was shown a red card on Tuesday following a running argument with officials from virtually the start of the game at the Moruleng Stadium in South Africa's North West province.

He ordered all his substitute back into the change room midway through the second half after Namibia had been awarded a controversial penalty.

Accusing officials of a conspiracy, Six also stormed off the bench and headed down the tunnel, had a cigarette and then sought to return - only to be promptly sent packing by Lesotho referee Osiais Kote.

The day before he had been called in by tournament officials after refusing to talk to the media after Mauritius first game at the southern African championship.

They had to remind him of regulations that insist coaches give a brief television interview one hour before kick off, speak to the cameras immediately after the final whistle and then attend a post-match press conference.

Six did talk to television after the warning ahead of Tuesday's match against Namibia but after his red card was absent again.

Cosafa also insisted that Six's anger at the the fact two of his payers were not registered for the tournament was misdirected, insisting the Mauritius Football Association is to blame.

Six won over 50 caps for France and played at Marseille, VfB Stuttgart in the Bundesliga and for one season at Aston Villa as a sprightly left winger.

He was Togo's coach when they reached the quarter-finals of the Africa Cup of Nations in South Africa two years ago.