A little under six years ago, Phil Brown burst into song to celebrate Hull City's relegation escape at the expense of Newcastle United.

The Tigers stayed up despite a home defeat by Manchester United on the final day of the 2008-09 season and Brown, then the manager, took to the pitch to treat supporters with his version of the Beach Boys' Sloop John B.

Now, under Steve Bruce, Hull's fate will again be decided when the Red Devils visit, but this time they need a win - and must hope that Newcastle to fail to beat West Ham.

Will the final whistle be music to Bruce's ears, or will John Carver's Magpies finally be on song? 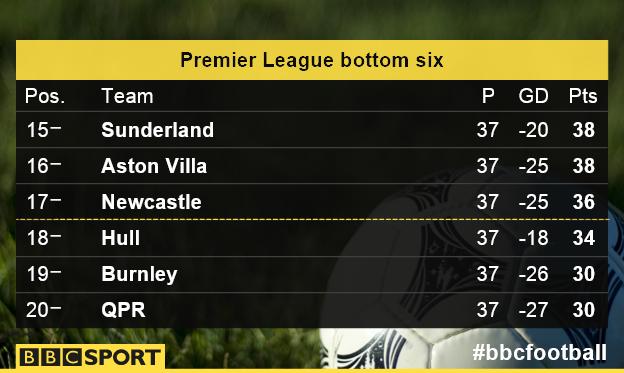 Third-bottom Hull are two points behind Newcastle but the Tigers have a superior goal difference.

That means no less than a win on Sunday will suffice. With fourth place all but certain, Louis van Gaal's visitors have little to play for but Bruce knows just how tough beating United can be.

In 21 attempts during 17 seasons as a manager, the former Red Devils captain has never won a match against the club he served as a player for nine seasons.

If Hull win, Newcastle will realistically also need three points - otherwise they will go down just like in 2009. They face a West Ham side managed by former Newcastle boss Sam Allardyce, who is a close friend of Bruce's.

Bruce might not thank his pal, though, if West Ham perform like they are already on their summer break, particularly after reports that some Hammers players were allowed to miss training for most of the week.

Good form has evaded both Hull and Newcastle at exactly the wrong time of the season but, of the two managers, Bruce has more cause for optimism.

Hull have lost their last three - including a damaging defeat against relegated Burnley - but that sequence came after wins over Crystal Palace and Liverpool.

Newcastle have lost nine of their last 10 matches, the other being a draw. They have won just two fixtures since Carver took over as manager and one of them was the 3-0 win over Hull on 31 January that could prove to be the difference between survival and relegation.

Bruce took charge of Hull in 2012 and guided them to promotion in his first season. Hull have never spent three consecutive seasons in the top-flight in their 111-year history.

Bruce said: "It's gone down to the wire. We are up against it but we have still got a chance and have to believe we have a chance.

"First of all we have to beat Manchester United, which is never easy. But there have been some strange results this season and we hope we can pull it off and get a favour from elsewhere.

"Let's hope there is one final twist because not a lot has gone our way over the past couple of months."

Newcastle's relegation in 2009 was sealed with defeat by Aston Villa in the final fixture of the campaign. Carver said he considered reminding his players of that day but opted against it.

Carver said: "I thought about showing them the fans after the Aston Villa game, but I decided against it because I think if you can't motivate yourself for a game as big as this when you've got so much to play for, then no matter what I show you, it's not going to make any difference."

Instead, assistant coach Steve Stone opened a door during a team meeting and boss Carver told people to walk through if they "didn't fancy it".

What would relegation mean?

The cost of dropping from the top flight is estimated to be between £40m and £50m and no one will rue that more than the clubs' owners.

Both Newcastle's Mike Ashley and Hull's Assem Allam have endured fractious relationships with sections of the club's support and relegation would do little to improve those dynamics.

Billionaire retailer Ashley took a controlling share in Newcastle in 2007 and, despite facing increasing opposition from supporters since then, he said in September that he does not intend to sell the club.

Allam was the toast of Hull fans in 2010 when he saved the club from the threat of administration, but sections of supporters no longer want the 75-year-old industrialist involved.

The main source of their ire is Allam's controversial idea to change the club's playing name to "Hull Tigers". Allam, who has approved about £42m of player purchases this season, says he is willing to sell Hull after protests against his plans.

Who do the pundits think will survive?

Savage said: "It looks like the situation got to the Hull players, despite Bruce's best efforts. They would have known that Burnley was a must-win game with two such tough opponents to come.

"You have to think now that they have missed their chance of staying up."

Former Republic of Ireland midfielder Kevin Kilbane was part of the Hull team that stayed up on the last day of the 2008-2009 season.

He believes his former club are in a better position than Newcastle going into Sunday's games.

Kilbane told the Guardian: "Looking back and looking at Hull's fixtures I'd prefer to be in Hull's position, because you have to win the match regardless of what happens elsewhere."

And if all else fails... ring Uri Geller

The famous spoon-bender told the Newcastle Chronicle that he could repeat his feat of 2001 when he took the credit for ending Newcastle's London hoodoo.

"I would only need two or three minutes with the players to get the adrenaline going and to motivate them. If Carver invites me that would have much more of a positive effect than anything else."