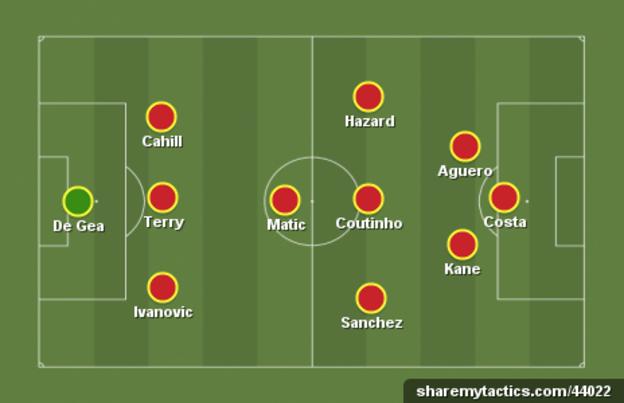 It has been a fantastic Premier League season.

Chelsea reigned supreme from day one, clinched the title with room to spare and were the standout team of the season - both in defence and attack.

The league has been illuminated by players such as Alexis Sanchez, arriving at Arsenal and bringing even more swagger to Arsene Wenger's cultured side - and perhaps an FA Cup winners' medal too - and Philippe Coutinho, who has managed the seemingly impossible feat of upstaging even the mighty Steven Gerrard in the Liverpool skipper's last season at Anfield.

With so much talent to choose from, it has been a difficult decision - but here are the players and the manager, who I thought excelled and have earned themselves a place in my team of the season.

United have a history of fielding great goalkeepers in the past and they seldom come better than Peter Schmeichel and Edwin Van der Sar. When they do come across a talent who can perform on the big stage with the same measure of accountability it is crucial that they keep him.

David De Gea is in that class and it is vital United retain the Spaniard in order to win trophies in the future or progress to the latter stages of the Champions League next season. Should De Gea follow Cristiano Ronaldo to Real Madrid, it would suggest that the gulf between the two clubs is far bigger than United dare admit.

Arguably Chelsea's most consistent player in recent years and a vital member of their defensive line-up. Branislav Ivanovic is capable of playing in any position across the back line and the ability to engage in attack or defence with the same intensity.

I cannot recall a single campaign during his time at the club where the Serb has not played a crucial role in the big games. A real danger on attacking set plays and a warrior in defence - and a winner if ever I saw one.

I thought this lad was past his best 18 months ago but the return of Jose Mourinho to Stamford Bridge has brought a new lease of life to the former England international.

There is arguably no other manager in the game who would have built his team around John Terry and no other captain who could have lead his team to the Premier League title so effectively. Terry and Mourinho were this season's perfect partnership.

There have been some memorable names that have occupied the centre back position for Chelsea over the years but I never thought Gary Cahill would be one of them. The speed in which Cahill has developed into a top-class defender has been frightening.

Not since the likes of Ricardo Carvalho and William Gallas have the Blues looked so secure in defence. Since his arrival at the Bridge he has won the Champions League, FA Cup, Europa League, League Cup and the Premier League title in a non-stop winning streak. Now that's impressive.

Matic is the best insurance policy Chelsea have signed in years. There is no other player in the Premier League who offers the kind of protection to his two central defenders like Matic.

All credit to Jose Mourinho, who watched the Serbia international leave Chelsea as a rookie but had no hesitation in bringing him back to Stamford Bridge for the princely sum of £21m at the start of the season. For me the best defensive midfield player in the world. You certainly get what you pay for.

I saw this lad play for Barcelona under Pep Guardiola on a number of occasions at the Nou Camp and he was impressive. Since joining Arsenal, under the direction of Arsene Wenger, he has become more accomplished.

There is no doubt in my mind that Alexis Sanchez has taken the Gunners a step closer to lifting the title but I sense he needs a little more assistance in key areas if Arsenal are serious about winning the Premier League next season. If Wenger fails to provide that assistance then Sanchez might be tempted to join a club who are not afraid to splash the cash in order to secure the title.

This lad has had the most fabulous season for Liverpool and he is seen as a major part of the club's future under Brendan Rodgers. So imagine what Philippe Coutinho is thinking at this moment having seen the departure of Luis Suarez, Steven Gerrard and almost certainly Raheem Sterling in the blink of an eye.

What Rodgers must do now is put a stop on any further departures and tell Coutinho that he intends to build a team around the Brazilian. That just might save Liverpool and Rodgers from another difficult season.

Congratulations to Eden Hazard, whose 20 goals in all competitions contributed to a Premier League title and League Cup double.

The exploits of the most exciting player in the country could not have been better acknowledged than being voted the PFA Player of the Year and the Football Writers' Association player of the year. There is no doubt he is world class but I wonder if the player now has the desire to climb on to the same stage and compete with the ageing Cristiano Ronaldo and Lionel Messi for 'best player in the world'? If so, a Champions League title next season might help.

Even though Manchester City finished Premier League runners up, their season has been considered a disappointment. One player who has not disappointed however is Sergio Aguero.

The Argentina international scored 26 league goals and might have added more to his tally if not for a series of injuries that caused considerable disruption to the player and the team. Chelsea should consider themselves somewhat fortunate that Aguero and Yaya Toure were not available to assist City in their quest to retain the title due to Aguero's injuries and Toure's international duty. Had circumstances been different the title race would have been much more interesting.

I don't think the season could have gone any better for Harry Kane. The highlight for me was the 5-3 win against Chelsea, which I believe had a profound impact on Mourinho and the way he approached the rest of the season.

The PFA Young Player of the Year has played with such infectious enthusiasm that we have all felt the buzz of Kane mania. His inclusion in the England squad was completely justified by his prolific goalscoring efforts for Spurs.

I find it utterly incomprehensible that Kane has now been replaced by lesser mortals in the national team to play the Republic of Ireland and Slovenia and seconded to the Under-21s in order to bolster the morale of the group.

The Football Association have gone to great lengths to argue the importance of developing English players and they reward their 30-goal man and most prodigious talent with an U-21 cap? Monstrous!

Very few strikers have succeeded at Stamford Bridge but the moment I saw Diego Costa play for Chelsea I knew he was going to be a huge success.

An uncomplicated striker who doesn't take kindly to being bullied by defenders, he keeps everything simple but is assassin-like once he enters the penalty area - a point that was demonstrated with devastating effect in 24 outings and 20 league goals this season.

Unfortunately due to the recurrence of a troubling hamstring injury, the Spaniard's absence caused Chelsea to lose their cutting edge. If Mourinho can't fix what is fast becoming an issue for Costa and Chelsea, it might cost all parties dearly next season.

MANAGER OF THE SEASON - Garry Monk

Very occasionally a young manager comes along with the courage to move players on, carefully select new additions and place them into a system that benefits the team as well as the player. Exceptional managers can do this without the slightest disruption to the culture of the football club and Garry Monk is proving to be one of those managers.

Swansea were in some difficulty after the departure of Michael Laudrup, so the club's directors put their trust in one of their own. A former player with the Swans, he captained the club through the divisions with, as he would admit, one eye on the top job. Personally I thought at 35 the appointment came far too soon but the job seem to fit Monk better than a Savile Row suit.

Win, lose or draw, his post-match interviews are always honest and mostly temperate. I can only remember him losing his cool when he alleged that Victor Moses had dived in the box for Stoke.

An unfortunate incident but I understood his frustration. The way he handled the sensitive and somewhat protracted departure of Wilfried Bony to Manchester City with a casual shrug of the shoulders and then thrust Bafetimbi Gomis onto an unsuspecting public was pure genius.

The youngest manager in the most competitive league in the world has proved to be an amazing appointment. He has once again finished in the top half of the table for the second consecutive year - and done so almost unnoticed.

He follows some exciting young managers at Swansea like Rodgers and Roberto Martinez, both of whom have gone on to manage big clubs. I sense that Monk may soon follow in their footsteps.