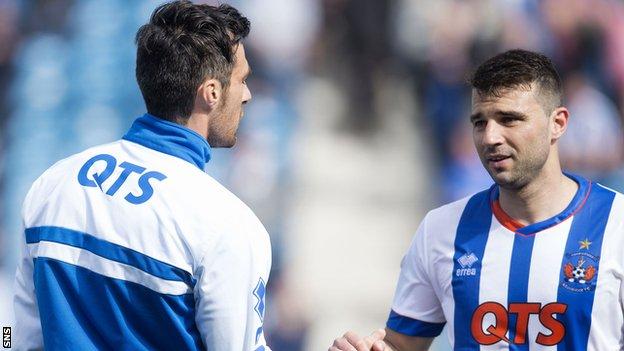 Alexei Eremenko expects to leave Kilmarnock in the summer after failing to agree terms on a new contract with the Premiership outfit.

The Russia-born Finland international joined the Rugby Park side for a second spell in 2014, scoring five times.

"I would love to stay here - me and my family - but the offer on the table is just not acceptable," Eremenko told BBC Scotland.

"So, sadly it looks like I'm leaving, but that's football."

Eremenko, 32, has played in Italy, Ukraine, Russia, Finland and Kazakhstan throughout a career which has seen him win 59 caps.

His wife is expecting another child and his seven-year-old son is involved in youth football at the club.

"Everybody knows my family likes it here and I like it here, but the situation is what it is and the offer Killie made me is not acceptable," said Eremenko.

"I just looked at the figures and I didn't want to know anything else than that. I'm not on big money now, so if I have to accept the offer I have to probably find another job besides football - I'm not ready to do that yet.

"I said it many times before; if I stay in Scotland I'll play only for Killie, with the exception of Celtic, but I don't think that's possible.

"I have had some talks with other clubs but at the moment I prefer to go abroad. Somewhere warm and near the sea. My next deal is going to be my last deal, so I have to think carefully what I'm going to do.

"Everything is possible. I'm not ruling anything out, but at the moment I just want to take seven to 10 days off to relax and then see what's going to happen.

"Players come and players go, coaches come and coaches go, but the shirt stays and the fans stay as well. I'll always follow Killie and I have made many good friends on and off the pitch, so I just have warm words to say about this town."

Kilmarnock manager Gary Locke says Eremenko has been offered a new deal, adding: "Alexei's at the stage of his career when this is probably the last contract he's going to sign.

"There is in interest in him from abroad as well."

Kilmarnock lost 2-1 to Ross County in their final game of the Scottish Premiership season, meaning they finished 10th in the league.