A burst of speed, a drop of the shoulder, and a pinpoint cross into the box. It was a trademark move one player used time and time again to bewitch his opponents.

Not Lionel Messi or Cristiano Ronaldo; not Pele or Diego Maradona. But a man born a century ago, Sir Stanley Matthews.

Matthews was born in 1915 and as the FA Cup final approaches 100 years on, memories are evoked of his finest hour - the eponymous 'Matthews Final' of 1953.

Blackpool beat Bolton 4-3 with a winning goal in stoppage time. Stan Mortensen scored a hat-trick, but it is Matthews with whom the match is inextricably linked.

In an era when the nation came to a standstill on Cup final day, England's most famous footballer finally got a winner's medal, at the third attempt, at the age of 38. And the country was behind him.

Matthews had joined Stoke City, his hometown club, as a boy. He became a global star in a time long before satellite television and the internet. 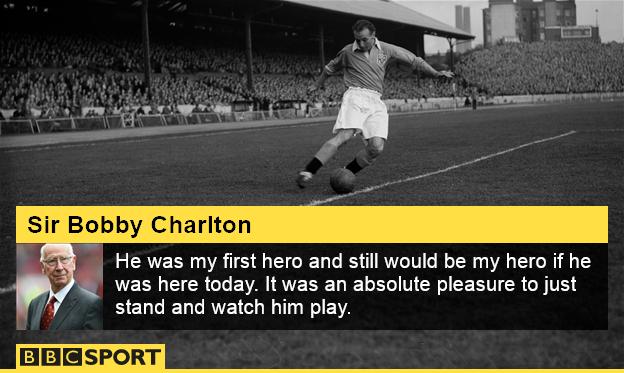 Just two of the players from that Wembley final are still alive: Doug Holden of Bolton and Blackpool's Cyril Robinson.

"Everyone wanted Stanley to win it," said Holden. "We did our utmost of course. We went 3-1 up and maybe we thought it was all over. There was a quarter of an hour left before Stanley really turned it on."

And Matthews did just that, breathing new life into his deflated team-mates and giving hope to the Blackpool supporters packed onto Wembley's terraces.

In attack after attack, Blackpool's tangerine waves swept the ball out to their ageing number seven. The pressure proved too much for Bolton. Mortensen cracked in a free-kick and the scores were level with time almost up.

"My grandma had to get brandy from somebody because she was fainting," his daughter Jean remembers. "We were all in tears. We're all so excited,"

With moments left, the ball is again fed to Matthews. Like a vintage sports car, his acceleration seemed effortless. A determined drop of the shoulder allowed him to dart past Bolton's full-back.

But, as Matthews reached the goal line, he slipped. He still somehow he managed to steer the ball past the desperate defenders to Bill Perry, in space, near the penalty spot for him to apply the finish.

Matthews had his medal and a place in history, but time has made the memories fade. And the rudimentary black and white television pictures scarcely compare with the high definition images we see of today's players.

So can a great from another era be compared with the modern stars who will grace Wembley's final in 2015?

"If you've got the ability you find a way. I'm pretty sure he'd find a way if he was playing today."