Sheffield United have appointed former Southampton and Reading boss Nigel Adkins as their new manager on a three-year deal.

Adkins, 50, has been out of work since being sacked by Reading in December.

He succeeds Nigel Clough, who was sacked by the Bramall Lane side last month after losing to Swindon in the play-off semi-finals.

"We know League One is a massive challenge but we will be looking to get promoted," Adkins said.

"They narrowly missed out in the play-offs and we've been given the opportunity to build on that.

"It is a slog and a grind and you have to get through it by working hard and being united."

Adkins has won promotion from the third tier three times as a manager, twice with Scunthorpe and once with Southampton.

The former Tranmere and Wigan goalkeeper led Saints to back-to-back promotions to the Premier League before being sacked in January 2013.

The Blades, who had an approach for Bradford City boss Phil Parkinson turned down last week, finished fifth in League One in 2014-15 and reached the League Cup semi-finals.

Adkins, who is joined by assistant manager Andy Crosby and first team coach Dean Wilkins, will be tasked with taking the club back to the Championship at the fifth time of asking.

They were relegated to League One in 2011 and have had three unsuccessful play-off campaigns in four seasons. 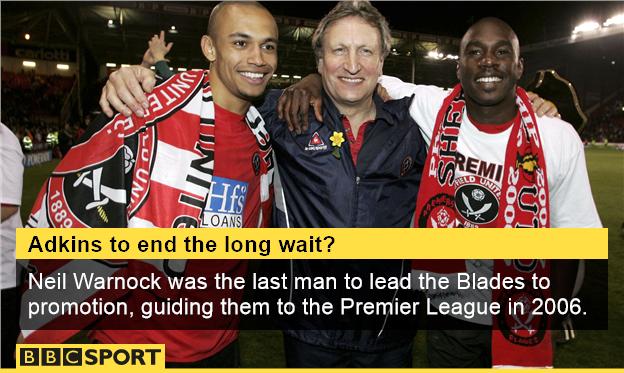