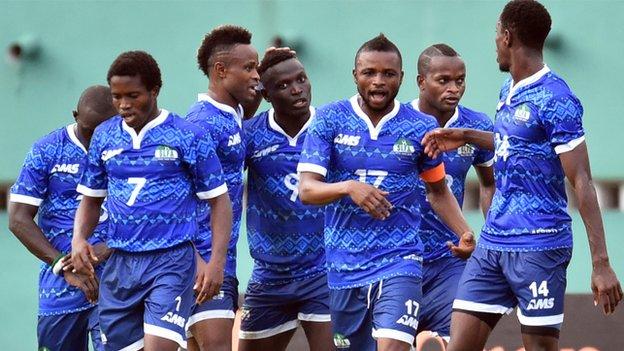 Former Sierra Leone international John Jebbor Sherington has been appointed caretaker coach of the national team for one match.

Sherington previously took charge of Sierra Leone for some matches in the 1998 World Cup qualifiers as well as during the 2006 and 2008 Nations Cup qualifiers.

This time, the 63-old, who is also the Technical Director of Sierra Leone Football Association, will take charge of the team for their opening fixture in the 2017 Africa Cup of Nations qualifiers, against Sudan in Khartoum on 14 June.

"I'll only serve as coach for our game against Sudan and the SLFA is expected to appoint a new coach before our next fixture against Ivory Coast," Coach Sherington told BBC Sport.

We know there has not been any domestic league for long time now but we can still do well.

"Already a local coach John Keister and several foreign coaches from Sweden, Croatia, Argentina and Brazil have applied for the coaching job advertised by the SLFA few months ago.

Sierra Leone, Sudan and defending Champions Ivory Coast are fighting for just one qualifying spot in Group I. Tournament hosts Gabon are also in the group but their matches will be counted as friendlies.

Sherington has stepped in following the departure of fellow local coach John Ajina Sesay, who was in charge of Leone Stars' last four games in the 2015 Nations Cup qualifiers.

Already Sherington has named a provincial squad dominated by home-based players mainly drawn up from the national under-23 team that eliminated Cameroon in the 2016 Rio Olympic games qualifiers last weekend.

However, his selection comes as a surprise as there has not been any domestic competition for almost a year because of the Ebola outbreak in Sierra Leone.

"We have only invited eight foreign based players for the match because the SLFA is managing the little resources it has as the Sports ministry has stated that it'll not longer fund national teams," Sherington said.

"Only four foreign-based players have so far consented to be available for the game. We know there has not been any domestic league for long time now but we can still do well.

"The Under-23 players have been training together for a very long time now and have played friendlies in Monrovia and even went further to eliminate Cameroon.

"The other locally based players have also been training with the home based national team for the Chan competition."

He concluded: "We know it's going to be tough in Khartoum but we'll try to do our best to get good result."