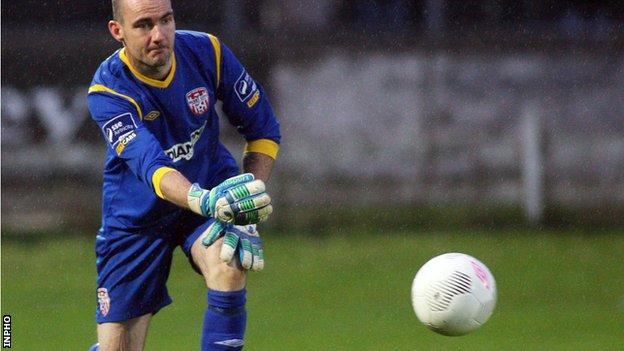 Josh Daniels, Barry McNamee and Cillian Morrison went close for City before Aaron Greene fired into the bottom to put the Dubliners ahead on 26 minutes.

James Chambers hit the City net from a free-kick in the second half and Chris Forrester's injury-time chip over keeper Gerard Doherty sealed the win.

Derry have picked up just two points from their last six league matches.

City were missing five key players but they made an impressive start, hitting St Pat's on the break and creating openings.

Daniels saw his effort turned round the post by keeper Brendan Clarke before McNamee flashed a shot wide.

Morrison was also off-target but Greene was clinical, capitalising on a defensive error by rifling in the opener.

Doherty was at his best to deny St Pat's twice before the break, keeping out strikes from Christy Fagan and Killian Brennan.

Clarke saved Patrick McEleney's shot as Derry made a bright start to the second half but Chambers smashed a low free-kick into the bottom corner to make it 2-0 on 56 minutes.

Lowry squandered a good chance to pull one back with the former Linfield midfielder volleying over.

Forrester added a classy third deep into added time, going past two defenders before dinking the ball over a diving Doherty.

The defeat takes the Candystripes, who have won just three of their 15 league games, down to ninth in the standings.

Peter Hutton's side are back in action on Monday night in a rearranged Premier Division game against Shamrock Rovers at Tallaght Stadium.