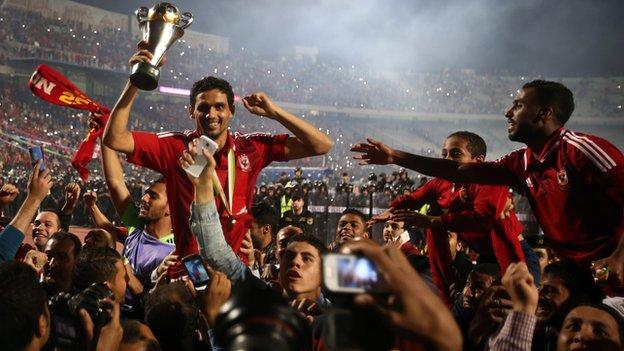 Confederation Cup holders Al Ahly of Egypt advanced to the group phase of this year's competition with a win on penalties over Tunisia's Club Africain.

Hosts Club Africain won the second leg of the play-off tie 2-1 with a goal from Nader Ghandri in the eighth minute of injury time.

Zouheir Dhaouadi opened the scoring for Club Africain to give them hope of overturning a 2-1 loss in the first leg but Emad Moteab equalised for the eight-time African champions on the hour mark,

Ghandri's late goal made it 3-3 on aggregate with both sides having scored an away goal forcing the tie to be decided on penalties with Ahly emerging victorious 5-4.

Three-time Confederation Cup winners CS Sfaxien had better luck than their Tunisian counterparts with 3-1 aggregate win over Asec Mimosas after a 1-1 draw in Ivory Coast.

Bangaly Soumahoro scored for the Ivorians after just 14 minutes but that was cancelled out by Mohamed Ali Moncer with 11 minutes left to play.

Etoile du Sahel overturned a 2-0 deficit from the first leg as they won 3-0 in Tunisia over Morocco's Raja Casablanca to ensure a third Tunisian club made it to the group stage.

Stade Malien also held on to a first leg lead to advance to the last eight as the beat Vita Club 4-3 overall despite a 3-2 loss in DR Congo.

The tie took a crucial turn during 10 first-half minutes when Abdeljalil Jbira of Raja was sent off and Algerian Baghdad Bounedjah bagged a brace for Etoile.

Former African champions Zamalek also overturned a first leg loss to progress as they won 3-1 in Egypt over Sanga Balende of DR Congo to make it 3-2 on aggregate.

South African side Orlando Pirates went through to the group phase of on Saturday with a comfortable win over AS Kaloum from Guinea.

The Soweto club won 4-1 to go through 6-1 on aggregate, after bringing their match forward in order not to clash with the European Champions League final.

Pirates built on their 2-0 first leg lead over Kaloum at Bidvest Stadium close to central Johannesburg because Orlando Stadium in Soweto is undergoing close-season maintenance.

Kermit Erasmus put the Buccaneers ahead midway through the opening half. Alseny Camara equalised with a glancing header to give the visitors a glimmer of hope that was soon extinguished by a Thamsanqa Gabuza brace.

He bundled a loose ball into the net for his first goal and then beat goalkeeper Youssef Toure at his near post with a shot that should have been saved.

A magnificent long pass from captain Oupa Manyisa allowed Sifiso Myeni to complete the rout with a half-volley goal.

No club has wiped out a four-goal, first-leg deficit in 88 previous Confederation Cup play-offs and Ghanaians Hearts of Oak never looked like creating history in west Africa.

Trailing 4-0 against Esperance, the Accra outfit did take an early lead through Isaac Mensah only for Aboud Moez to level a minute from time and give the Tunisians a 5-1 aggregate win.

The match went ahead in Accra despite three days of national mourning for those who died in the inferno and the flooding in the area this week.

It was the final game as coach of the Tunisians for Portuguese Jose De Morais, formerly part of the Jose Mourinho backroom staff at various European clubs.

Congolese AC Leopards continued to be the scourge of Nigerian clubs when they eliminated Warri Wolves from the Confederation Cup play-offs.

The central Africans lost the return match 3-1 in southern Nigeria, but advanced 4-3 on aggregate having established a 3-0 first-leg advantage.

It was the third time in four years that the Congolese have sent Nigerian opponents packing in a pan-African competition.

Warri survived several early scares before taking control of a goalless first half at Warri City Stadium with Solomon Kwambe foiled by the woodwork and Ojo Mine heading wide from close range.

Nigeria international Gbolahan Salami gave Wolves the lead two minutes after half-time, but the worst fear of the hosts was realised soon after.

Salami scored again and Oghenekaro Etebo was on target a minute from time to earn Warri a deserved but hollow victory.