Nine of the 12 Premiership teams were among the 27 of the country's 42 senior clubs who said they would be in favour of examining the possibility.

Only seven clubs said such a move would not interest them, with eight not offering a view.

The Scottish Professional Football League says it is open to debate on "a complex matter".

Since the BBC conducted the survey, Motherwell have been in touch to say they too are in favour of examining a switch to summer football.

The questions posed to all clubs were:

While no strict definition was applied to the term "summer football" and several clubs expressed interest in different dates, the overall response indicates an appetite for change.

Not all clubs wanted their stance on the matter to be made public, but Dundee United, Hamilton, Kilmarnock and St Johnstone were among nine top-flight clubs keen to examine the issue further. 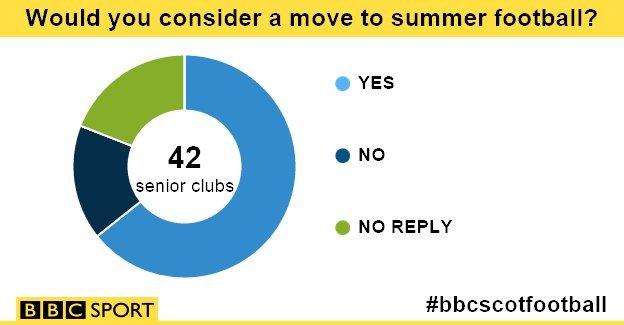 Only one unnamed Premiership club was opposed to changing the calendar, while two did not reply.

Scotland's football season runs from early August to late May.

A Scottish Football Association spokesperson said the organisation would be "happy to re-open the debate" and will include the BBC Scotland findings at the next meeting of its joint strategy group.

The Scottish Football Supporters' Association added its backing to a summer switch, saying: "Filling stadiums will never happen if we continue to play matches in the coldest and wettest months of the year."

Supporters Direct Scotland is also in favour, suggesting the following benefits for a March to November season:

However, SPFL chief executive Neil Doncaster warned that "there are all sorts of complexities that need to be taken into account" before a summer switch could be implemented.

"There are two key constraints," he told BBC Scotland.

"One of is the international calendar given to us by Uefa and Fifa, which means there is a whole range of dates that are simply not available.

"Typically, those midweek dates are ones we would quite like, when the weather is better.

"The other constraint is the number of games we ask our teams to play."

With top-flight teams playing 38 league games a season, taking part in two domestic cups and some with European commitments, Doncaster said major restructuring would be needed before a summer switch could be considered.

He also posed the question: "Do we want to be playing games at a time when a World Cup or European Championship is going on?

Gain media commercial revenues due to the league stretching over a less competitive sport market period. Major commercial and sponsorship opportunities for the same reasons. (Hamilton)

Provides competitive advantage to Scottish teams in Europe having played 20+ games prior to entry into first qualifying round of Europa League and 25+ for Champions League entrants. (Dundee Utd)

Do not think there would be a financial benefit to the clubs and, in our case, there is no issue with games being cancelled as we play on a synthetic surface. (Queen of the South)

At part-time level, when do players get the opportunity to take family holidays? (Forfar Athletic)

Would we attract the same level of support in the summer months with our supporters involved in other sports and out of the country on summer holidays? (Peterhead)