There are five candidates for the manager's job at Rangers, according to chairman Dave King.

And he acknowledged that Stuart McCall, who led the club to play-off final defeat, remains in the running.

"There were potential managers who dropped out of the race because we are still in the Championship," said King.

Pledging to spend "whatever it takes" to win promotion next term, King said an announcement on the manager is unlikely to be made this week.

McCall, 50, took over from Kenny McDowall on a short-term deal in March, steering Rangers to a third-place finish and the play-off final, where they lost out to his former club Motherwell.

Praising McCall's "fantastic attitude", King stressed that failure to get promoted was "not viewed negatively".

Former Brentford boss Mark Warburton has confirmed that he has spoken to Rangers and would bring former Rangers captain Davie Weir as his assistant, if successful.

"With a club like Rangers there are a lot of names that might come forward, but it's important that we balance the obvious need to make an appointment with getting it right," explained King, who ruled out the possibility of the club immediately introducing a director of football.

"We're looking for an appointment to see us through the next three years.

"I think it's important that the person has the right level of authority to meet our objectives as a club over the next three seasons." 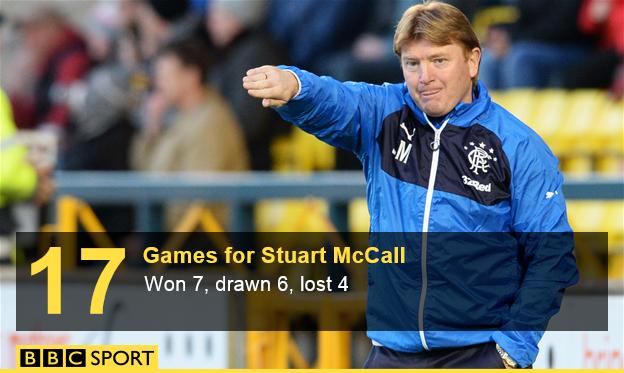 With 11 out of contract players, including captain Lee McCulloch, having already moved on, the Rangers team is sure to look very different next season.

"We will need money now to beef up the squad," said King, who led a successful boardroom takeover in March.

"We need players to be competitive in the Premiership, so there will be substantial investment in next months. It may be necessary to over-invest.

"The mandate is to get players who could perform in the Premiership and that would greatly reduce the risk for next season."

McCall, who won six titles in seven seasons at Ibrox as a player in the 1990s, is currently coaching with the Scotland squad ahead of Saturday's Euro 2016 qualifier against the Republic of Ireland.