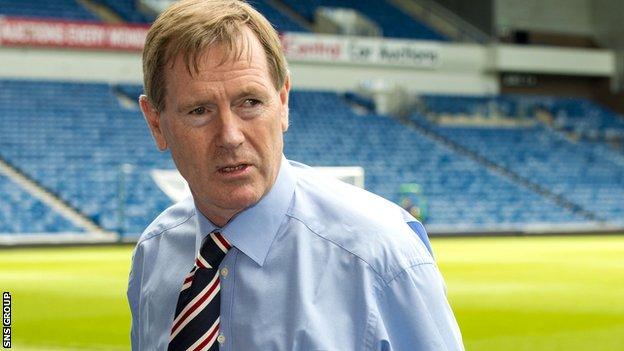 Chairman Dave King addressed a number of key issues as Rangers launched their season ticket renewals with the hope that fans will return to the club to support the rebuilding process.

From the managerial vacancy to investment and funding plans, King was asked to provide more detail about the board's plans as the club prepares for another season in the Championship.

So what did he say, and what did it mean?

Search for a manager

King revealed that there are five "realistic" candidates and that the likelihood is that an appointment will be made by next week.

The chairman insisted that Stuart McCall is still in the frame, despite being unable to guide the team to promotion, but also that other potential candidates dropped out of the running because the team will not be in the top-flight.

McCall and Mark Warburton, the former Brentford manager, have been spoken to, while reports suggest that Ian Cathro, the Valencia assistant manager, has also held discussions.

The wait for King to be cleared as fit and proper by the Scottish Football Association to become chairman, and then for the play-offs to be resolved, has delayed the process.

The balance is between making the appointment quickly enough that pre-season plans can be put in place while new signings are targeted, and making sure the right man is in place.

The plan is for a management team to be in place to oversee the three-year rebuilding process.

A committee has been involved in the search for a manager, and King himself has yet to speak to Warburton, although some bookmakers have stopped taking bets on the Englishman.

Even so, Warburton is available and has already held talks, so has he not been appointed due to wage demands or reservations?

There will be no director of football, at least for now. That role may be revisited, but the intention is to appoint a manager and leave the authority with him to meet the club's aims.

That puts a lot of oversight pressure on the board.

King did not want to estimate a figure for the investment required this season. The board's hope is that they will sell out season tickets, which would generate between £12m and £13m, although it seems unlikely that full uptake will take place with the team in the Championship.

Rather than set a budget, King insisted that "over-investment" will be required.

The intention is to sign players who can compete in the top-flight, not just in the Championship, so the budget may be more than would just be required to meet this season's expectations alone.

This is a similar approach to previous regimes, who over spent, although there are key differences.

Rangers are, firstly, only one promotion away from the top-flight, where revenues would increase significantly.

While running a larger budget than all other clubs in Scotland except for Celtic, the Rangers of Charles Green, Craig Mather et al also overpaid players they could easily have signed on lower terms. A critical combination occurred: players were paid too much and then did not perform.

Perspective is also relevant, since Rangers can afford to outspend all rivals in Scotland except for Celtic, so what constitutes over-investment?

The recruitment strategy is clear: sign players with the next three years in mind rather than simply next season. This ought, if well enough managed, to be more economical in the long run.

Mistakes were made in the past, though, and they will remain fresh in the minds of supporters.

Overspending caused Rangers' financial collapse and then failure to rebuild in the immediate aftermath. Where King and his fellow directors need to be shrewder is husbandry of the wages and the management of the recruitment strategy.

The reality is that King and his fellow directors and investors are urging supporters to trust them, in their motivations and the judgements.

The former is straightforward, since King, Douglas Park, Paul Murray, John Gilligan, George Letham and George Taylor are all lifelong Rangers fans and involved through their emotional connection with the club rather than to make a return on their money.

Nonetheless, an attachment to the club does not guarantee infallibility.

Mistakes are inevitable when the scope of the rebuilding job is so large; the key factor is limiting errors of judgement and their consequences.

Other issues exist, including further talks between King and Sports Direct later this week about the commercial and other agreements between the two businesses.

"The arrangement cannot be working for Sports Direct," King said. "Rangers have gone from a period where they were selling 500,000 shirts to selling about 50,000.

"Until we are in a position to feel to confident enough to come to the fans and say we now have an arrangement that we believe is fair to the club then I wouldn't expect them to support it at much higher levels.

"I'm hoping they see the season ticket situation differently, because all of that is going into the football side."

How much King and his fellow investors provide initially will be determined by factors like season ticket sales, commercial revenue, the £5m Sports Direct loan and what it takes to rebuild the squad.

Further investment will then be required to rebuild the rest of the club.

Fans, in effect, need to take King, his fellow directors and investors on trust. That has been a commodity in short supply in recent years at Ibrox and only actions - not words - will restore it.

"We're going to increase the running costs of the club. It's not sustainable over the next three years, that's why the club requires support from investors," King said. "The idea is to have it sustainable at the end of the three year period.

"I'm not viewing it in terms of getting a return on my investment. If I was, I wouldn't be here. I'm genuinely doing it for the love of the club."

This is a critical time for Rangers, and the decisions made now will have long-term consequences.