England failed to score for the first time in 18 matches as they lost their opening European Under-21 Championship tie against Group B rivals Portugal.

Earlier, group rivals Sweden came from behind to win 2-1 against Italy.

Two-time champions England, who won in 1982 and 1984, were among the pre-tournament favourites after breezing through their qualifying group with nine wins from 10 matches.

But Gareth Southgate's men now need a positive result against the Swedes on Sunday if they are to fulfil expectations.

Southgate's preparations were hampered on the eve of their opening match when key defender John Stones and top scorer Saido Berahino were both ruled out through injury.

West Brom striker Berahino will miss the whole tournament with a knee problem and, in his absence, Tottenham striker Harry Kane started as England's lone front-man.

The PFA Young Player of Year was left isolated for large periods of the game, although he did force Portugal keeper Jose Sa into a full-length save with a fierce long-range shot shortly after the half-hour mark.

That sparked the Young Lions into life as the match edged towards half-time, Manchester United winger Lingard cutting in from the flank and flashing two efforts past the far post.

However, England were only still level at that stage thanks to a wonderful early save from Jack Butland. The Stoke goalkeeper had to instinctively push clear when defender Liam Moore inadvertently diverted a right-wing cross towards the England goal.

But Butland could not prevent Mario's opener as a fortunate bounce off England left-back Luke Garbutt presented the opportunity to Silva.

The Monaco midfielder drilled the ball against the foot of the post from 10 yards, but the rebound fell straight to the feet of team-mate Mario, who tucked it home.

England had not failed to score in a game since June 2013 but, with substitute Danny Ings firing straight at Sa late on, could not break down a stubborn Portugal defence. 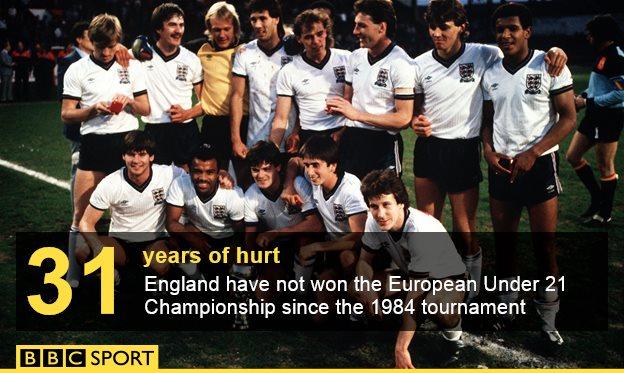 Italy, who have won the competition on a record five occasions, took the lead against Sweden when Juventus striker Domenico Berardi drilled a 29th-minute penalty into the bottom corner.

Sweden defender Alexander Milosevic was shown a red card for the challenge which led to Italy's spot-kick, but his team-mates fought back to level early in the second half when ex-Manchester City striker John Guidetti guided in from inside a packed penalty area.

The Azzurri saw their numerical advantage wiped out when midfielder Stefano Sturaro was dismissed for shoving Sweden's Filip Helander in the face.

And they were punished with four minutes left when Isaac Kiese Thelin converted a penalty to spark wild Swedish celebrations.

View all Euro Under-21 Championship results