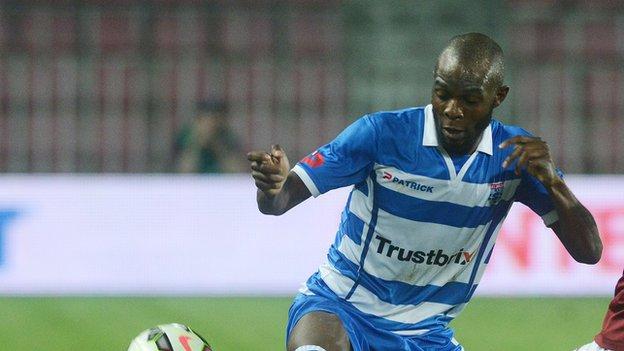 Jody Lukoki was just 12 months old when his family fled the Democratic Republic of Congo.

Now the winger from Dutch club PEC Zwolle is heading back for the first time since to play for the country in the Africa Cup of Nations qualifiers this weekend.

On Sunday, he is in line to make his competitive debut for the Leopards against Madagascar in Kinshasa.

It was during the civil conflict in the then Zaire that Lukoki's parents fled, taking their twin boys Jody and Madjer and settling in the Dutch capital Amsterdam.

Their hasty departure was not an experience his parents often talked about, says the 22-year-old Lukoki, who hails from Kindu, capital of the Maniema province.

And even though his parents were later reconciled with the country and have in later years returned, Lukoki grew up Dutch and with just a passing interest in his heritage.

"My parents say what a great land it is and how much it has changed for the better," he told BBC Sport.

Lukoki was scouted by national coach Florent Ibenge, who took the Congolese to a surprise third-place finish at this year's Nations Cup in Equatorial Guinea.

Ibenge has since been scouring around Belgium and the Netherlands to reinforce his side.

"My brother said to me 'do it!' and my parents told me I must be able to make my decisions freely," says Lukoki when he learned of Ibenge's interest.

"They support me in everything I do. The coach told me that he really wanted to have me in his squad.

"His ambition is to get to the World Cup in Russia in 2018 and he wants to use a lot of the younger players (of Congolese heritage) in Europe."

Lukoki, who came through the Ajax Amsterdam system before joining PEC Zwolle last year, says the approach came as a massive shock.

"It was certainly not something I had expected, especially because I had played for the Netherlands in some of the junior teams," he explained.

"But it feels really good (to play for DR Congo). It is the country of my birth."

Lukoki made his Leopards debut in March when they played Iraq in a friendly in Dubai but it is a first trip to DR Congo that has him all fired up - "absolutely," he says.

The Congolese have a host of new players from the Diaspora for their Group B match against Madagascar, including Abel Tamata from Dutch champions PSV Eindhoven, Fabrice Nsakala of Anderlecht in Belgium and Jacques Maghoma from Sheffield Wednesday.

Lukoki's story follows the tale of Lomana LuaLua and Shabani Nonda, who both played for DR Congo at Nations Cups.

Nonda was born in Burundi after his family escaped DR Congo and he grew up in a refugee camp in Tanzania, first playing for Young Africans before going on to star at Rennes, Monaco and Blackburn Rovers.

LuaLua was born in Kinshasa before moving with his family as a young boy to England, where he took the first steps of his professional career.

Fabrice Muamba is arguably the most famous of the footballers who were originally refugees from DR Congo while England international Saido Berahino has a harrowing history of escaping ethnic violence in Burundi during which his father died.

He was separated from his mother and only reunited with her in Britain years later.