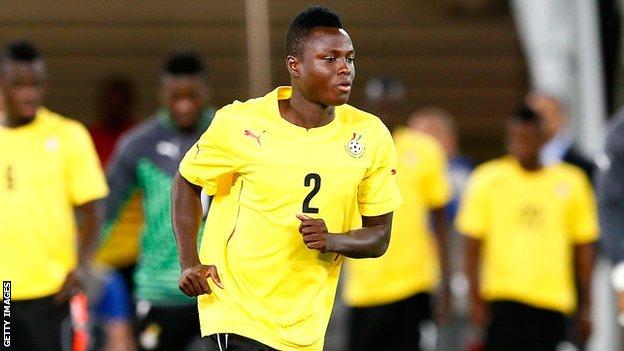 Portuguese club Boavista have completed the signing of Ghana defender Samuel Inkoom on a free transfer.

Boavista also snapped up 23-year-old Nigeria striker Uche Nwofor from Belgian club Lierse on a three-year-deal for an undisclosed fee.

Inkoom, 26, has also joined on a three-year deal after leaving MLS club DC United in December.

"It's a fresh start for me. I'm delighted to have joined a very ambitious club" Inkoom told BBC Sport.

"I had some conversations with the Boavista coach (Armando Goncalves Teixeira) and I'm exited and motivated by his positive vision and plans.

"The club has a great history and I am excited to play in one of the best leagues in Europe."

An integral part of the Ghana team at the 2010 and 2014 World Cups, Inkoom rejected a move to another MLS side Houston Dynamo and opted for a return to Europe instead.

"The competitive nature of the European game is incomparable because you get to face tough opponents every weekend," he said.

"I plan to repay the club's confidence with all the required dedication."

Inkoom joined Swiss club FC Basel in April 2009 and won a League and Cup double with them in 2010.

After impressive performances in the Uefa Champions League and Europa League, he became target of a host of European top clubs but it was Dnipro who snapped him up for €10 million Euros in January 2011.

He made 31 appearances for Dnipro before playing the final two years of his contract on loan at French side Bastia and Greek club Plantanias.