Would it surprise you to learn the best-paid player in women's football earns as much as a Premier League star?

Alex Morgan, currently hoping to steer the United States to a third Women's World Cup triumph, earns up to $3m (£1.9m) a year, the bulk of that from sponsorships and endorsements.

That puts the 25-year-old Portland Thorns striker in among the average incomes for men playing in England's top flight, albeit way behind the top Premier League players earning upwards of £13m a year.

Her high profile in America ensures she earns about 30 times more than the roughly £65,000 a year commanded by leading English players, such as Manchester City and England captain Steph Houghton.

Brazilian striker Marta, a five-time Fifa World Player of the Year who now plays at Swedish side Rosengard, was reported to have earned up to $315,000 (£202,000) a year from her former Swedish club Tyreso.

But after they went bankrupt in 2014, the Women's World Cup's record goalscorer is not even the best paid player at her new club.

Like Morgan, the 29-year-old earns most of her money through sponsorship. 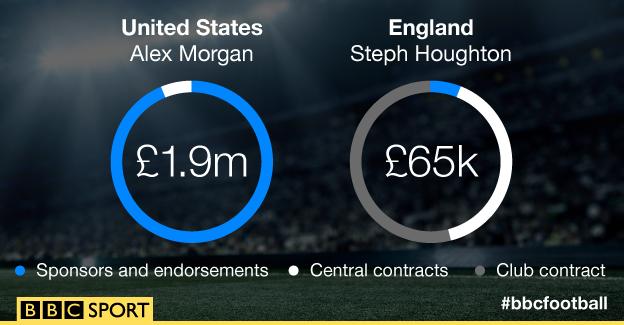 Why does Morgan earn so much more?

After helping her country to the 2011 World Cup final and the 2012 Olympic title her profile blossomed and the striker now counts Nike, Coca-Cola, McDonald's, Nationwide Insurance and Tampax among her clients.

The remainder - about $180,000 (£117,000) - comes via the US National Soccer team. Unlike in England, American club teams do not pay US internationals after the previous domestic league folded in 2012.

After the US team won the World Cup in 1991 and 1999, the popularity of football with girls and women in America has allowed players like Morgan to profit, says agent Dan Levy of Wasserman Media Group.

Levy told BBC Sport: "In America there are millions and millions of girls playing the sport at a young age, and mums who played the sport are now making consumer decisions.

"The buying power of women and the importance of what sport can do is tremendous. More girls who played soccer growing up are now CEOs or marketing officers of companies, so I think they see a value in that."

The US women's football market contrasts hugely with England, where football has only been semi-professional since 2011 and endorsement income is still in its infancy.

Of Houghton's £65,000 a year salary, only about £4,000 comes from sponsorships, although players can earn five-figure deals on a one-off basis.

The advantage English internationals have over their European counterparts, though, is that they can call upon an income from their national federation.

England and Chelsea striker Eniola Aluko, who has put her career as a lawyer on hold to play football, told BBC Sport: "Salaries have certainly improved a great deal with the central contracts coming in so that players don't have to worry about having another job in order to survive."

But the percentage of players who can earn up to £65,000 a year is very small, says Professional Footballers' Association agent Matthew Buck, who represents many of the England squad.

"The majority of centrally contracted players earn about £20,000 from their clubs, but there are players in the WSL who are on as little as £50 a week," he said.

"Some younger players get their university costs paid for by teams but many older players need to work second jobs or are also employed in other areas of their clubs."

The England and US teams are not the only federations who have taken steps to avoid the boom and bust scenarios seen in women's football recently.

The national federations of Canada, Mexico and Brazil all contribute to their players' incomes, helping to take the financial burden away from clubs and to avoid the US domestic league folding again.

By rewarding England players with central contracts, the FA believes it can grow the game in a sustainable way. It also keeps England players in the country, therefore helping to develop the domestic league. Jodie Taylor is the only player in England's World Cup squad to be playing outside the country.

In the US domestic league - the National Women's Soccer League - there is a salary cap. For US national team players, who are rewarded by their federation, that is no issue. But for players who still want to play there among the world's best, it can mean taking a pay cut.

Scotland's former Arsenal midfielder Kim Little now earns about £21,000 a year after moving to Seattle Reign in 2014, which is less than her salary at the Gunners, but the Scot is among many who still consider the standard of football to be higher in the US than in England.

Marta's agent, Fabiano Farah, told BBC Sport that leagues in the US, Germany, France and Sweden are also considered better than in England, particularly in the eyes of sponsors.

How can things improve in England?

After the FA announced a new seven-figure title sponsor deal for the Women's FA Cup last week, there are sign of improvement in England.

The FA aims to make the women's game the second biggest participatory sport in England behind men's football and announced recently that crowds are up to record levels, with an average of 892 in WSL1 and 326 in WSL2.

However, it is still true that the FA funds the majority of women's football in England and endorsement earnings are poor.

Levy recognises that the English game is about 20 years behind America in terms of its growth but he says that the rise of social media could help to boost players' incomes.

"Girls and women in general are very active on social media and that has helped women's players a lot," he said.

"Alex has over four million followers on various channels and that's very significant. For companies, it's the first thing they look at - what reach can they get."

Aluko believes that success on the world stage is the best way to reach Morgan's level of income.

In Canada, England will be hoping to make it past the quarter-finals of a World Cup for the first time, and Aluko said: "Hopefully we can get to that point but it's great to see role models like Abby Wambach or Alex Morgan earn a lot of money but also respect playing for their country."