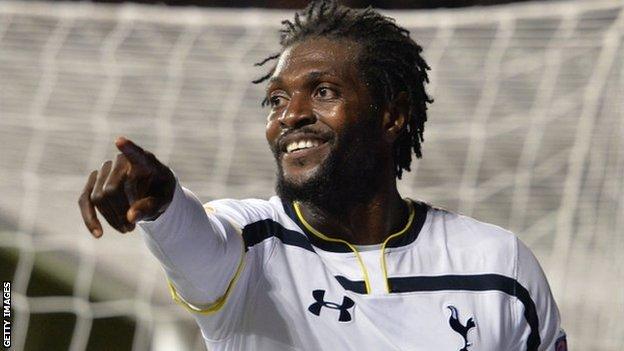 Togo striker Emmanuel Adebayor is set to play against Liberia in Sunday's Africa Cup of Nations qualifier despite joining up with the squad late.

The 31-year-old Tottenham forward missed Monday's friendly against Ghana, with coach Tom Saintfiet angry about the player's lack of discipline.

Adebayor told BBC Sport: "The match against Ghana was not very important. I told the coach I would not play.

"But I am now preparing myself for the match against Liberia."

He added: "This match is very important for us. If we want to qualify for the tournament in Gabon then we must win this match at home.

"I am feeling well. I have never abandoned the national team. I am Togolese and I have always defended the colours of the national flag.

"What is important for Togolese people is that I should be on the pitch that day and I am preparing for that.

"Our main goal remains qualification. We failed to make it to the last tournament, so we must do all we can to qualify this time around."

Saintfiet has confirmed Adebayor - and Kossi Agassa and Floyd Ayite - will return.

The Togo coach told BBC Sport: "I never had a problem with any player, they were only not in camp so I could not select them.

"Now they are all at work I can let them play."