Wales went top of Euro 2016 qualifying Pool B with a momentous 1-0 win over previous leaders Belgium in Cardiff.

Gareth Bale scored the only goal on his 50th appearance for his country, seizing on Radja Nainggolan's shocking defensive header to score in the 25th minute.

Wales stayed organised and disciplined to the end, keeping at bay a side ranked second in the world.

How well did the Wales players perform out of 10 at Cardiff City Stadium?

Although Belgium dominated for long periods, Wales' goalkeeper did not have many saves to make. Made one fine stop from Radja Nainggolan and commanded his penalty area with authority.

Moved to centre-back and adapted well, supporting Richards whenever Hazard darted inside and helping his fellow central defenders to cope with the physical threat of Christian Benteke.

Another commanding display. Dealt with Benteke comfortably and read a number of dangerous situations well, stepping in to tackle and clear when Belgium were at their most threatening.

Back in the side after injury, the Hull City defender played a solid role in a formidable team defensive display. Good in the air and pragmatic with the ball. 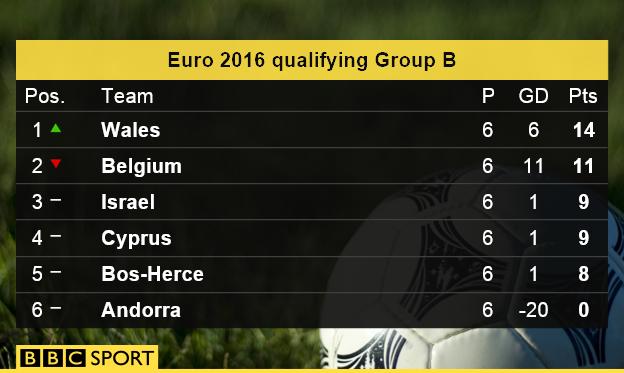 Although he spent most of the match tracking back to thwart Belgium's attacks, the Swansea City left-back also gave Wales some much-needed balance out wide when he pushed forward to take the pressure off his fellow defenders.

Battled willingly with bigger opponents such as Axel Witsel to ensure Wales were not bullied in midfield. His yellow card for a foul on Hazard means he will miss Wales' next match against Cyprus.

Having worked himself into promising positions in the first half, the Arsenal midfielder's influence waned in the second as Wales dropped deeper to repel Belgian attacks.

Time and again the Real Madrid star rises to the occasion and he did so here with a remarkably calm finish for the only goal of the game. Always looking for the ball and wanting to run at opponents, Wales' talisman was a thorn in Belgium's side as he marked his 50th cap in style.

Wales' lack of possession meant the Reading forward did not have many scoring chances, and he missed his best opportunity as he shot wide after Ramsey's first-half effort was saved. Ploughed a lonely furrow up front and worked tirelessly for the team's cause.

Neither had enough time on the pitch to make an impression.