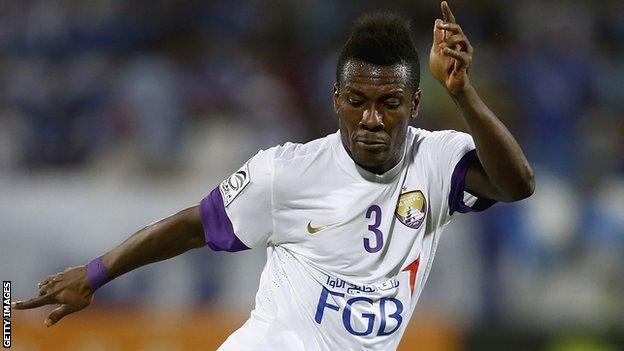 Ghana captain Asamoah Gyan scored twice to help his side secure a huge 7-1 victory over Mauritius in their opening 2017 Africa Cup of Nations qualifier on Sunday.

All the Black Stars' big names lived up to their reputations, with Jordan Ayew also scoring twice and Christian Atsu adding one. Jeffrey Schlupp was also on the scoresheet and David Accam struck Ghana's final goal.

J. Sophie scored for Mauritius but the visitors were already 4-0 down by then and were never going to get anything out of the Group H tie.

Emmanuel Adebayor turned from villain to hero for Togo as they came from behind to beat Liberia 2-1 in Group A.

The Tottenham striker missed his side's previous match - a friendly against Ghana last Monday - but made up with coach Tom Saintfiet to be included to face Liberia.

After helping Togo cancel out William Jebor's opener, Adebayor struck the winner with only one minute left of normal time.

Rwanda earned a valuable away win over Mozambique in group H.

The visitors grabbed all three points thanks to a solitary strike which came after only three minutes through Ernest Sugira.

It gives Northern Irishman Johnny McKinstry a flying start to his reign as Rwanda coach, in his first competitive fixture since being appointed in March.

Ethiopia also got off to a strong start, beating Lesotho 2-1 in Group J.

The game was played out in front of a huge crowd at the Bahir Dar Stadium, with reports suggesting more than 60,000 people were in attendance.

The massive home support were stunned on 41 minutes when the visitors took the lead. But after the break Gatoch Panom equalised and Saladin Said scored the winner on 85 minutes to give the partisan fans plenty to cheer.

In Group B, DR Congo also made their home advantage tell as they overcame Madagascar 2-1.

Firmin Mubele Ndombe and Joel Kimuaki Mpela scored a goal each to put the hosts in control and despite Madagascar pulling a goal back only four minutes later, it was enough for DR Congo to claim the win.

In neighbouring Congo, the points were shared as Kenya earned themselves a 1-1 away draw in Group E.

Paul Were put the visitors ahead on 12 minutes but they were pegged back by an equaliser from the penalty spot by Prince Oniangue.

The same scoreline gave 2015 hosts Equatorial Guinea a point as they fought back from a goal down at home to Benin.

Captain Emilio Nsue rescued Equatorial Guinea when he scored in the 48th minute, preventing them from kicking off their Group C campaign with a defeat.

Egypt, who have missed the last three continental finals, scored three times in nine second half minutes to break the resistance of Tanzania and win 3-0 in Alexandria.

Goals from Ramy Rabia, Basem Morsi and Mohamed Salah lifted Egypt to the top of their pool ahead of Nigeria on goal-difference.

A 39th-minute penalty from Soulemane Sacko was enough to give Niger victory over visitors Namibia in their Group K opener.

There was also a 1-0 win for Sudan over Sierra Leone with Ramadan Agab's second half penalty separating the two sides.

And in Group M, it was also a case of one goal proving sufficient for a win as hosts Cameroon edged out Mauritania.

The Indomitable Lions left it to the last minute of the game as Vincent Aboubakar got the late strike that separated the teams.

The friendly in Group I between the 2017 hosts Gabon and defending African champions Ivory Coast ended 0-0.