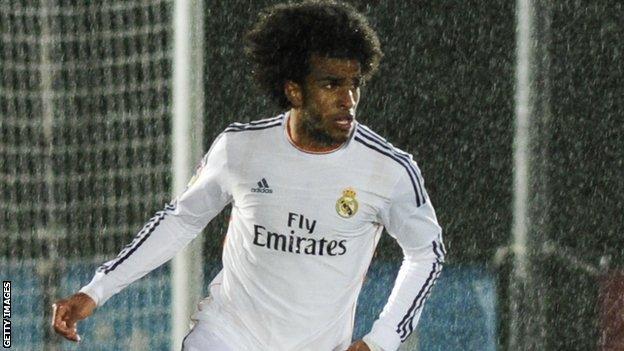 Former Spain youth international defender Derik Osede Prieto has revealed to BBC Sport why he wants to play for Nigeria.

The 22-year-old centre-back, who is known simply as Derik, has played at all youth levels for Spain including two appearances for the Under-21 team.

But Derik, a regular for European giants Real Madrid's B side, is eligible to play for the Super Eagles because his father is Nigerian.

And under Fifa rules he is free to switch because he has not yet played for a country's senior national team.

Despite possessing the talent to potentially make the step up to Spain's senior side, Derik has issued what appears to be effectively a come-and-get-me plea to the Nigeria Football Federation (NFF).

"I have lived in Spain all my life and I am not sure the people in Nigeria are aware that I have Nigerian blood," Derik told BBC Sport.

The immediate plan now is to go out on loan elsewhere, because at this age I need stability and regular football

"But I crave for something special with Nigeria because it will give me a chance to properly connect with the ancestral home of my father.

"My father is from Benin City [southern Nigeria] and even though I have never been there I always follow events in Nigeria.

"I celebrated when the country won the Africa Cup of Nations in 2013 and I was cheering the team at the last World Cup in Brazil."

Derik joined Real Madrid's academy in 2002 at the age of nine and has steadily made the transition from the club's C team to the Castilla side [B side], where he has become an integral member of La Fabrica.

An extremely athletic centre-back with great vision, Derik's talent has not gone unnoticed.

Former Real Madrid manager Carlo Ancelotti included him in his 20-man squad for the 2014 summer International Champions Cup in the United States.

"Playing for Spain was the foundation to where I am today and I can never take that for granted," he said.

"You can't throw away your education or outgrow it, Spain gave me what I have now and my hard work got me to where I am.

"But somehow I feel one half of my life has always been left untouched and I need to fix that."

Derik has rejected suggestions he could be using Nigeria as a bargaining chip in his push for a call-up from the Spanish U-23 or senior selectors.

He insists: "Even if it's difficult for some people to understand, I have made my decision [to represent Nigeria] and am going to stick to it.

"My father has not influenced my decision in any way. I respect him and adore his outlook on life but it's my personal desire to play for Nigeria.

"When you look around Europe there are several Nigerian players playing at the top level and the future looks bright for the team.

"With that in mind I want to be a part of that group. I do not need favours from anyone, I only need an opportunity.

"If I get a chance with Nigeria, I believe my versatility as a player will make me stand out."

Despite his ambition of flying with the Super Eagles someday he is only too aware of the challenges ahead in the coming years.

Derik made his Real Madrid B team debut against Millonarios in 2012, the same year he won the European Under-19 Championship with Spain.

But in June 2014 Real Madrid B suffered an embarrassing relegation into the third tier of Spanish football and Derik knows plummeting down that road could dash his hopes.

He is aware that level is a far cry from the incredible heights being enjoyed by the likes of Sergio Ramos and Pepe - his more illustrious rivals - in the first team.

"I would like to play in the Real Madrid first team someday, knowing if I did that maybe the chance would be there to play for Nigeria," he explained.

"But if I am not playing at the top level week in, week out, I wouldn't expect to receive a call from anyone because that would be daydreaming.

"The immediate plan now is to go out on loan elsewhere, because at this age I need stability and regular football to fulfil my dream.

"Training alongside big players like Cristiano Ronaldo, Gareth Bale, Modric, Sergio Ramos and Pepe gives you a taste of what you can be as a footballer.

"The hard truth is that there is no available shortcut to reaching that level and staying there. I need to work extremely hard wherever I go and play first team football regularly. "