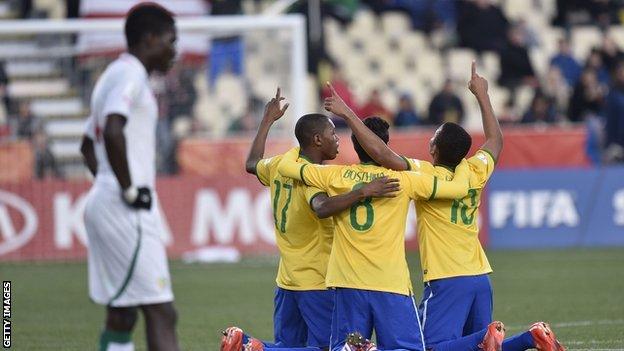 Senegal and Mali both exited the Under-20 World Cup at the semi-finals stage on Wednesday, ending Africa's hopes of taking the title.

It was a crushing 5-0 defeat for Senegal in their match, which was virtually over after only seven minutes.

Andelinou Correa scored an own goal on five minutes and Senegal's disastrous start got worse just moments later when Marcos Guilherme finished off a sweeping move to make it 2-0.

Gabriel Jesus struck the post as Brazil continued to press, and in the 19th minute Boschilia tapped in after goalkepper Ibrahima Sy was unable to hold a cross.

Senegal's Sidy Sarrdid hit the bar soon after but they went 4-0 down when Jorge score a fine solo effort.

And just before the break Senegal's misery was compounded when Elimane Cisse was sent off for a second yellow card.

The fifth and final goal came on 78 minutes when Guilherme scored his second of the game.

Mali fared better against Serbia, forcing extra-time after coming back from an early goal to hold their opponents to a 1-1 draw after 90 minutes, but eventually falling 2-1.

Only four minutes were on the clock when Andrija Zivkovic burst through to open the scoring.

Having been on the back foot for the first half an hour Mali began to work their way back into the game and they drew level through a ferocious 30-yard strike from Youssouf Kone.

Serbia almost regained the lead when Milan Gajic struck a volley against the bar, but extra-time was needed to separate the teams.

And on 101 minutes substitute Ivan Saponjic nodded in to put his side 2-1 ahead.

Mali's hopes of a comeback took a blow when Kone received a second yellow card six minutes from time, and Serbia held on to book their place in the final.

A further sour note for Mali was the reaction of Kone, who looked to have pushed referee Mauro Vigliano following his second yellow. He was pulled away by team-mates and went behind the goalposts.

Mali coach Fanyeri Darra said after the game: "Until the end of the game we believed in our strength to win, but ... the inexperience of our players was the main point in our defeat."

Mali and Senegal will play in the third place play-off.