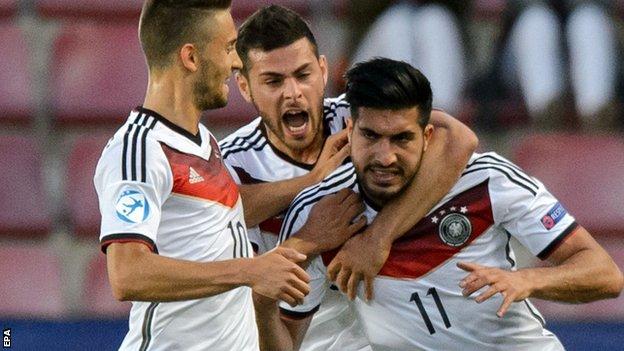 Tournament favourites Germany had to be content with a draw against Serbia on the opening day of the European Under-21 Championship in the Czech Republic.

Filip Djuricic slotted Serbia ahead after a smart solo run, but Liverpool's Emre Can curled in Germany's equaliser.

Germany played the last 20 minutes with 10 men after Christian Gunter was sent off, but managed to hold on to a point.

Earlier, hosts Czech Republic lost 2-1 as Denmark fought back from behind in the tournament's opening match.

Germany are hotly tipped to win the tournament for a second time, having eased through their qualifying campaign unbeaten and boasting the likes of Barcelona goalkeeper Marc-Andre ter Stegen and midfielder Can in their squad.

But the 2009 champions lacked rhythm against an organised Serbian side, who were without a host of big-name players.

Although Liverpool forward Lazar Markovic, Anderlecht striker Aleksandar Mitrovic and ex-Manchester City defender Matija Nastasic were all missing, the Balkan nation threatened to cause a huge upset on the opening day.

Former Southampton loanee Djuricic ran through the centre of the German defence, after nutmegging an opponent to create space, before driving low past Ter Stegen to give Serbia an early lead.

However, Germany levelled when Can smartly turned away from his marker on the edge of the penalty area and clinically found the bottom corner.

The second half failed to match the excitement of the first, with neither side creating many clear-cut opportunities. Gunter's dismissal for a second yellow card - given for diving - provided hope of a memorable win to Serbia, but they were unable to make their numerical advantage count.

The 19th edition of the tournament began earlier on Wednesday when the Czech Republic met Denmark in Prague's Stadion Eden.

Czech full-back Pavel Kaderabek put the hosts ahead, cutting in from the right flank before curling into the bottom corner from the edge of the area.

But centre-back Jannik Vestergaard headed in the equaliser for Denmark, before substitute Pione Sisto poked in the winner from close range late on.

Michal Travnik thought he had claimed a point for the Czech Republic, but his effort was ruled out for offside.

View all Euro Under-21 Championship results