Former Rangers player Bilel Mohsni has received an additional three-match ban from the Scottish FA following his part in a post-match brawl at Fir Park.

The 27-year-old was already suspended for four games for cumulative red cards, including one after full-time of Rangers' defeat by Motherwell in May.

And three matches have been added for "excessive misconduct" by "kicking" and "punching" ex-Well player Lee Erwin.

Mohsni says he will "find a job and work" if he cannot get a new club.

The Tunisia international made his final Rangers appearance as a substitute in the 3-0 loss in Lanarkshire, which completed a 6-1 aggregate defeat by Motherwell in the Scottish Premiership play-off final.

That result secured the Steelmen's top-flight status and consigned Rangers to at least another year in the Championship.

Mohsni responded to a push by Erwin by aiming a kick and punch at the striker. Mohsni also tussled with Motherwell's unused substitute Fraser Kerr. 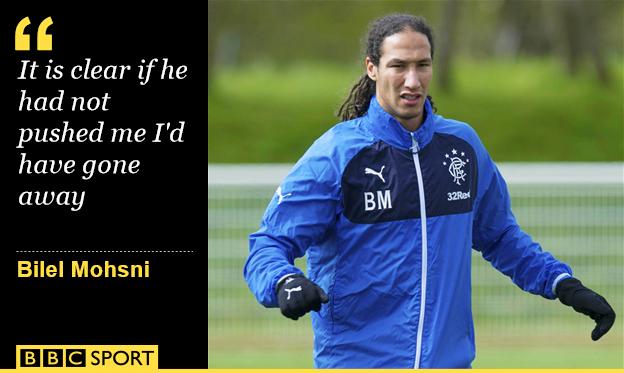 Kerr and Mohsni were shown red cards by referee Craig Thomson after the match and Erwin received a yellow card.

However, the third item on Mohsni's disciplinary charge, 'struggling violently with Fraser Kerr', was deleted, meaning the additional three-game ban is for his conduct towards Erwin, who has since joined Leeds United.

The duo were involved in separate clashes with Mohsni after Motherwell's win.

For Mohsni's ban to be served, it will have to be recognised by the registering association of his next club.

And he said: "You know what? I don't care anymore.

"If a manager trusts me, I will be happy to play for him. If no-one trusts me, it's okay. I will find a job and work.

"I'm upset by this - even more by the fact I received seven games and Erwin received zero. It's very harsh, but this is life.

"If you see everything on the video, it is clear if he had not pushed me I'd have gone away and would be back in France on holiday right now, not coming back to Glasgow for a hearing.

"When I ask all of the people I know what they would do, they all tell me they would react the same way.

"Because when someone pushes you from the back, it's like an attack, so you defend yourself. All I did was defend myself."