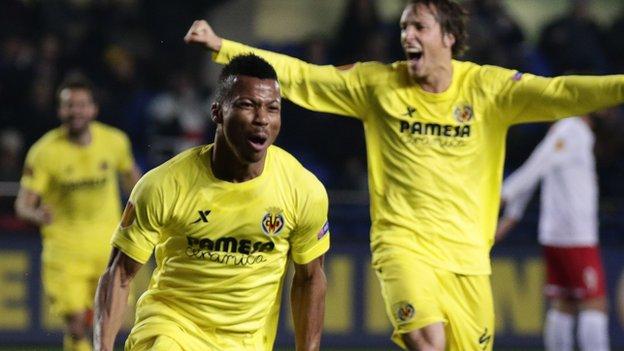 Nigeria international striker Ikechukwu Uche says he is ready for a new challenge in Mexico.

Mexican side Tigres de la UANL have signed the 31-year-old for an undisclosed fee on a three-year deal from Spanish club Villarreal.

Uche becomes the first African to join the Monterrey-based side who have won the league and cup in Mexico thrice.

"The project here is very attractive and I thought why not," Uche told BBC Sport.

"I've played in Spain my entire professional career and the opportunity to play in Mexico is a fresh challenge.

"All the Mexican players I've played with all had something positive to say so it wasn't a difficult decision."

Uche joined Villarreal in 2011 from Real Zaragoza after stints at Spanish clubs Recreativo Huelva and Getafe, and scored 103 goals in 13 years in Spanish football.

Tigres are aiming to become the first Mexican team to win South America's Libertadores Cup and will resume their campaign against Brazil's Internacional in the semi-final next month.

"I'd like to thank the management of the club for their professionalism," he added.

"The desire and persistence shows how much they want me here and my plan is to repay their confidence."

Uche, who moved to Spain in 2002, offered his gratitude to Villarreal for allowing him to complete his move.

"I must thank the people at Villarreal, the fans, my teammates and everyone connected with the club for the love and support," he said.

"I spent an amazing four years at the club and made good friends. I left enriched with only positive memories."

Uche began his career with Racing Ferrol at the age of 18 before moving to Spanish second division club Recreativo Huelva in 2003.

His arrival inspired the club's renaissance, with the Nigerian producing some of the best form of his life to help the club secure promotion to the top flight with a haul of 20 goals in the 2005/06 season.

After four relatively successful seasons with Recreativo Huelva scoring 50 goals he joined Getafe in June 2007. Seven goals in 33 appearances led to another move to Real Zaragoza.

But his stint at Zaragoza between 2009 and 2011 was blighted by 18 months of injury, which cost him a place at the 2010 World Cup, before switching to Villarreal in August 2011.

He was immediately loaned out to then Spanish La Liga newboys Granada, for the 2011/12 season where he only managed three league goals.

But he returned to relegated Villarreal for 2012-13 and emerged as top scorer with 14 goals to lead the team back to the top flight.

In 2013-14, Uche scored another 14 goals as the club finished in sixth place to secure a Europa League spot.

His eight goals for the Yellow submarine last season were enough for long-term admirers Tigres to quickly swoop.

Uche, an African Nations Cup winner with Nigeria in 2013, is widely regarded as one of his country's most reliable strikers at international level.

He remains one of Nigeria's all-time top scorers with 19 goals in 47 appearances, behind Rashidi Yekini, Segun Odegbami and Yakubu Aiyegbeni.