New Swansea City defender Franck Tabanou says the club's potential to play in Europe was one of the reasons behind his decision to sign.

Tabanou, 26, joined Swansea from St Etienne for around £3.6m, having helped the French club qualify for next season's Europa League.

The former France Under-21 left-back wants to achieve the same with Swansea.

"Playing in the Europa League would be a dream, but I also think it's a possibility," said Tabanou.

"The Premier League is a very good standard and qualifying for Europe will be very difficult."

Swansea played in the Europa League during the 2013-14 season, having won the Capital One Cup in the previous campaign.

The Swans reached the second round of the Europa League, where they were knocked out by Italian side Napoli.

Tabanou is Swansea's second signing of the summer, after Ghana forward Andre Ayew joined on a free transfer from Marseille. 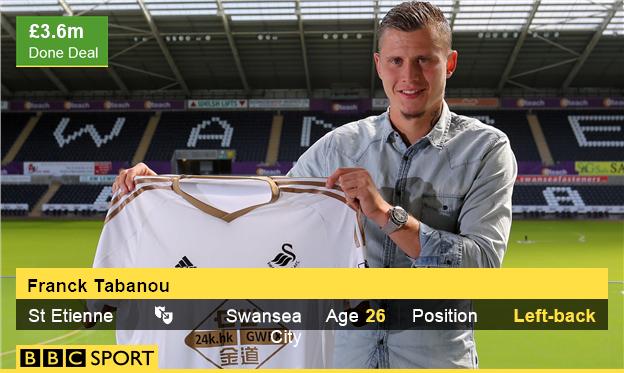 "I've had a look around and I really like the city. I think I'm going to be very happy here," said Tabanou.

"Swansea had a very good season last year to finish eighth. They're a great team with excellent players and play very good football.

"When I found out they wanted to sign me I couldn't wait to come."

Tabanou has spent the majority of his career as a left-back but has played on the left wing and in midfield.

The 26-year-old will vie with Wales defender Neil Taylor for the left-back berth in Swansea's first team, and the Frenchman welcomes the challenge.

"There's a lot of competition to play for in good teams - it's the same for every position," Tabanou added.

"You have to prove yourself to be picked."