Wigan had already agreed a fee for 24-year-old Kiernan, who has signed a two-year contract, while fellow defender Wilson had decided to leave Hearts.

The 23-year-old, who was Hearts' captain, signed a three-year deal.

Wilson, who had also been linked with Celtic, began his career at Ibrox but was sold to Liverpool for £2m in 2010.

He failed to become a regular at Anfield but shone at Hearts following a move to Tynecastle.

Warburton said on Monday the former Scotland Under-21 international was one of the players attracting his interest and he is to be presented to the media in Glasgow on Tuesday.

Veteran midfielder John Eustace is also a target for Rangers after being released by Derby County.

"We are making progress," Warburton said. "We hopefully have a positive few days ahead.

"There are a number of targets and, as you can imagine, we have to be discreet."

However, Warburton stressed that, while he was looking for a couple of experienced leaders, he was mainly targeting young, "hungry" players with potential and who "passionately" want to play for Rangers.

"I think marquee signings are dangerous," he said. "The biggest mistake we could make is to panic and get the wrong players at the wrong time.

"The club we have just come from, Brentford, the average age was 23 and a half I believe, and we had a 33-year-old and 34-year-old in that."

Eustace, who had a spell on loan to Dundee United from Coventry City before time with Middlesbrough, Stoke City, Hereford United and Watford, has been earmarked as a potential captain.

"They are playing the game at a very high level at 33, 34, 35 because they look after themselves, they train well, they eat well, they conduct themselves well. 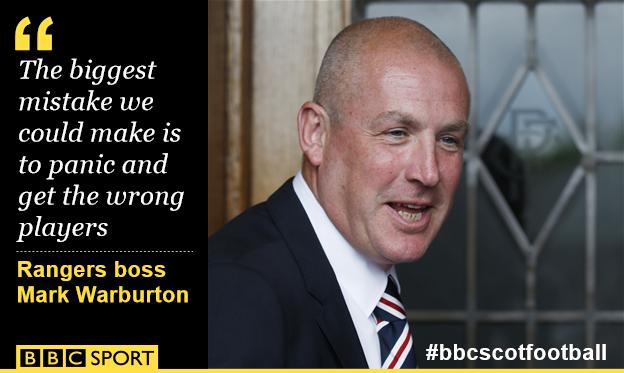 "If you look at his record and the win ratio when John's playing, it's really important. He had a big role to play at Derby over the last few years."

Meanwhile, Warburton said Hibernian midfielder Scott Allan was only "one of a hundred" players Rangers were considering and expressed no knowledge of being linked with Aarhus central defender Jens Jonsson.