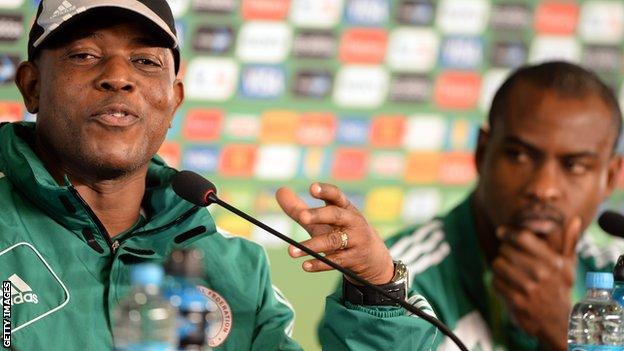 Coach Stephen Keshi met with the Nigeria Football Federation's (NFF) disciplinary committee on Tuesday to answer questions on why his name appeared on a list of candidates to manage Ivory Coast.

However goalkeeper Vincent Enyeama declined the chance to appear to answer questions about comments he made about playing an international match in Kaduna.

The NFF executive board will have the final say on any punishments, on a date yet to be decided.

Keshi, who signed a new two-year deal with the NFF in April, was on a list of 59 applicants published recently by the Ivorian federation (FIF) to take over from Frenchman Herve Renard.

Meanwhile, Super Eagles captain Enyeama made "uncomplimentary remarks" regarding safety and security in Kaduna for a 2017 Africa Cup of Nations qualifier against Chad.

Enyeama, who plays for French club Lille and is the Super Eagles most capped player with 101 appearances, failed to reply to messages from the NFF seeking an explanation for his comments.

The 32-year-old could face a lengthy ban for his comments which the NFF feels broke its recent code of conduct signed by the players as well as his failure to attend Tuesday's hearing.