Danny Wilson says he does not need to justify his decision to rejoin Rangers.

The defender, 23, left Hearts this summer, passing up the chance to play in the Scottish Premiership and faces another season in the second tier.

However, pressed on the thinking behind the move, he said: "I'm quite happy with the decision that I made."

Meanwhile, Rob Kiernan, 24, has denied reports he failed a medical at Birmingham City before joining the Championship club.

Warburton succeeded Stuart McCall, who guided Rangers to the Scottish Premiership play-off final, but they were beaten by Motherwell and will remain in the Championship next season. 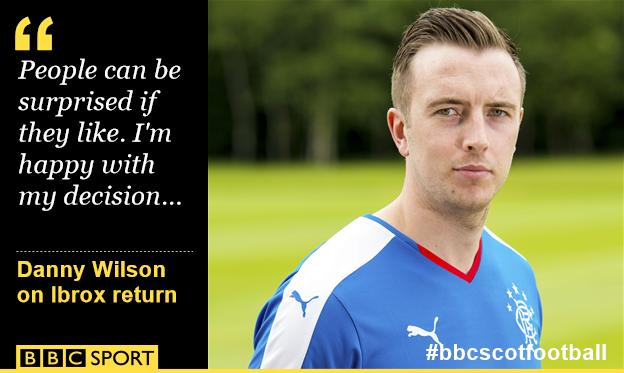 Speculation had linked Wilson with a move to Celtic but he refused to say whether any discussions had taken place.

"People can be surprised if they like but hopefully we won't be playing in this league for too long," he said.

"Hopefully we'll get promoted and be back challenging and maybe people who have been a bit sceptical will understand my reasons.

Wilson said Warburton's plans for Rangers had helped persuade him to return to the club he left five years ago to join Liverpool. The Scotland player subsequently had loan spells with Blackpool and Bristol City before joining Hearts, initially on loan.

Kiernan, who has had several loan spells in England and one at Kilmarnock, has already worked under Warburton as a youth player at Watford and is looking forward to renewing that acquaintance.

And, seeking to clarify what happened with the proposed move to Birmingham, the Republic of Ireland Under-21 player said: "I respect Birmingham as a club and I respect the manager and everyone there.

"I completed my medical there, I went back to sign the next day and the paperwork wasn't quite ready when I arrived.

"During that time, the phone call came from here so I was a little bit disappointed that it [the proposed move to Birmingham] turned sour.

"I've actually got the email confirmation [about the medical] from the club and to my agent. I've never failed a medical, I completed everything that was asked for and I've come here and passed a medical.

"I'm ready to go on Saturday [at the start of pre-season training]."