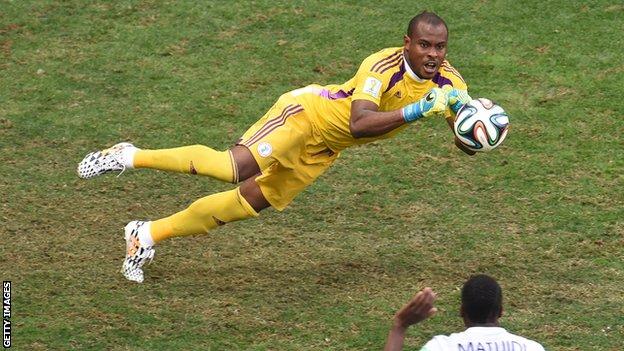 Keshi said an un-named agent submitted his name without his knowledge for a job as Ivory Coast coach.

For his part Enyeama says he thought his case closed after apologising for his "uncomplimentary remarks" about security in Kaduna.

His comments came ahead of of June's Africa Cup of Nations tie against Chad.

The NFF felt his comments breached a code of conduct signed by all players earlier this year.

Keshi, who signed a new two-year deal with the NFF in April, was on a list of 59 applicants published recently by the Ivorian federation to succeed Frenchman Herve Renard.

Top NFF official Chris Green has been widely quoted in the local media as saying they may travel to Abidjan to enable them 'reach a reasonable conclusion' on the matter.

Enyeama believed his issue had already been dealt with.

"I was told to apologise for my comments, which I did immediately and they told me that's fine," Enyeama told BBC Sport.

"Personally, as it was resolved in-house I thought that was the end of the matter.

"I only received a letter to cautioning me about it [my comments] and to avoid a repeat of such."

The 32-year-old, who is the Super Eagles most capped player with 101 appearances, denies he failed to reply to messages from the NFF seeking an explanation for his comments.

"But I only found out about a disciplinary hearing in the media but I didn't get any letter to that effect," he explained.

"As the captain I only raised our concerns about the venue before our game which didn't go down well with the football authority.

The Lille player could face a lengthy ban for his comments which the NFF feels broke its recent code of conduct signed by the players as well as his failure to attend Tuesday's hearing.

The NFF executive board will have the final say on any punishments, on a date yet to be decided.

It has also been confirmed that the Super Eagles will play their next home 2017 Nations Cup qualifier against Egypt in Kaduna next March.