England are creating history at the Women's World Cup - and at the heart of their march to the semi-finals is a Welshman who has taken an unorthodox route to the top.

Manager Mark Sampson has risen from the obscurity of Wales' amateur leagues to the pinnacle of women's football, where he has led England to their first win in the knockout stages of a World Cup.

England's 2-1 victory against hosts Canada was a momentous achievement for Sampson and his players, who qualified for the last four of the tournament for the first time.

Sampson's side will now play holders Japan in a game that will be live on BBC One from 23:10 BST on Wednesday, 1 July.

But has the 32-year-old's hand in English success prompted any teasing back home in Wales - especially as his team beat his home country to qualify for the finals?

"Every day, but it's great," says Sampson.

"There's always that bit of banter isn't there? But certainly the support from back home has been immense.

"I've had some family and close friends out here [Canada] with me and obviously getting the message from back home, old clubs, team-mates, colleagues, friends.

"It's great to see that support for the team and for myself and it just makes it even more special that we are managing to achieve what we have." 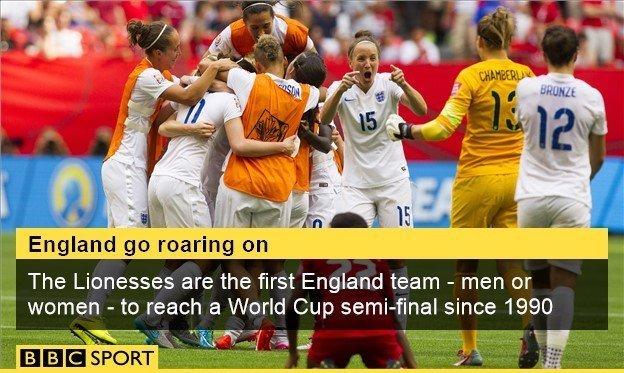 Sampson acknowledges to role his early experience in Wales has had on his career.

"I think my whole career journey has been a strong learning path for me.

"Whether that be educational, formal coaching qualifications or experience at various different clubs.

"Obviously the support of the Football Association of Wales (FAW) as well, I progressed to do some of the coaching badges there, so I'm really pleased that I've managed to get myself to this level.

"I'm really proud and honoured to be the England Women's manager and to represent this team at a World Cup and certainly all the experiences I've had over the course of my career have helped me get to this place now."

Sampson has taken an unusual route to what is one of the most influential jobs in women's football.

Raised in Creigiau, near Cardiff, Sampson's playing career was a brief and modest one in the Welsh amateur leagues with the likes of Cardiff Corinthians.

He soon turned his attention to coaching and, after working with the youth team at local club Taffs Well, he was appointed first-team manager of the Wales League Division One side in 2008.

"What he did was change the way we played," says Don James, Taffs Well's club's treasurer.

"While we were very sorry to lose him, we're very pleased he's gone on to such heights in the game.

"We hope he takes his team on to win it [the World Cup]. I know it's England, but we have to put up with that!"

Sampson went on to work at Swansea City's centre of excellence, overseeing the development of Premier League players such as Joe Allen and Ben Davies.

It was his work with Women's Super League side Bristol Academy, however, which brought Sampson to England's attention.

Building a career over the bridge

That helped him secure the coveted England post, succeeding Hope Powell in 2013.

Wales and Seattle Reign midfielder Jess Fishlock played under Sampson at Bristol and has been impressed by her former boss' England side.

"I worked under him for two years and I'm pleased for him and his squad - they're doing a great job," says Fishlock.

"The changes he's made have made the difference. That's why they are where they are."

It is telling that Fishlock should highlight Sampson's changes as one of the defining aspects of his tenure.

The manager has rotated his squad and switched formations constantly during the World Cup, and his tinkering has paid off with three consecutive wins.

"Sampson is the tinkerman, that's what everybody has been calling him," says former England winger Rachel Yankey.

"Previous manager Hope Powell did a great job of setting up the team defensively over the years but the players felt frustrated that we went up to a certain point on the pitch and had no end product. We wanted to express ourselves and we had the creative players to do that.

"England still do know how to defend but Sampson has to give them a licence to express themselves. I really believe they can go and win games."

Another chance to make history

Sampson said his players had "delivered for the country" after they came from behind to beat 1995 World Cup winners Norway in the second round.

They now enter further uncharted territory, but Sampson is not phased about facing holders Japan.

"They [Japan] are probably one of the most exciting teams to watch. They haven't scored many goals but they haven't conceded many," he said.

"They are the reigning champions and it will be a huge challenge for the England team but we are ready and in the next couple of days we will find a game plan and field a team that will give us a great chance to get to the final."