Rooney scored a record-equalling 49th goal with an early penalty but was surprisingly substituted by England manager Roy Hodgson with history beckoning and the San Marino defence out on its feet. He must now try again against Switzerland at Wembley on Tuesday.

There was still plenty for England to celebrate, though, as they made it seven wins out of seven in qualifying to ensure they will be in France next summer.

England were never under threat and it was another damage limitation exercise for San Marino, especially after Cristian Brolli headed into his own net before half-time.

Rooney made to wait

There was general astonishment - probably shared by Rooney himself - when he was substituted after 58 minutes needing just one goal to beat Charlton's record.

Rooney will surpass the former Manchester United player's mark eventually and perhaps it will be more fitting should he seal it against Switzerland at Wembley on Tuesday rather than this quaint 6,600-capacity arena with many fans getting a free view from the hills that rise up at one end of the stadium.

It looked like the record was there for the taking when Rooney tucked away that early penalty but he had no further clear chances - although one would surely have come against a home defence that was exhausted in the last 25 minutes. 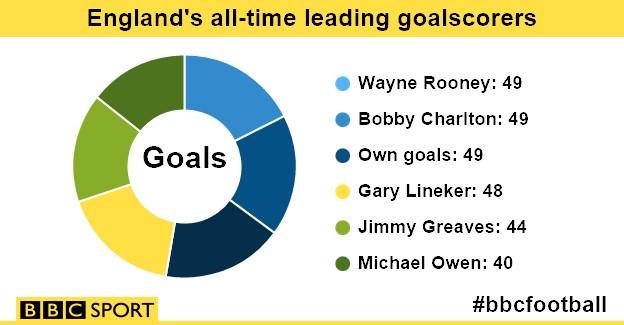 How the fresh faces fared

England manager Roy Hodgson gave opportunities to players in the relatively sedate surroundings of San Marino and one man in particular took his chance with relish.

Swansea City's Jonjo Shelvey, making his first England appearance in almost three years, was positive in possession, happy to play a deeper role but also willing to get forward and show his range of passing. He capped his performance by making the fifth goal for substitute Kane.

He will have created a good impression with Hodgson through his discipline and work-rate and can feel he has worked his way back into the England fold.

Barkley also made his mark with a neatly-taken header from Alex Oxlade-Chamberlain's cross as well as a few trademark moments of quality.

It was a tougher night for Leicester City's Jamie Vardy, who struggled to get into the action and, for a short while in the second half, became embroiled in a running battle with San Marino defender Giovanni Bonini.

Everton's John Stones, at the centre of so much speculation recently as Chelsea were willing to pay in excess of £30m for his services, had little to do other than handle the unique pressure of ensuring San Marino did not score their first goal of the Euro 2016 qualifiers on his watch. 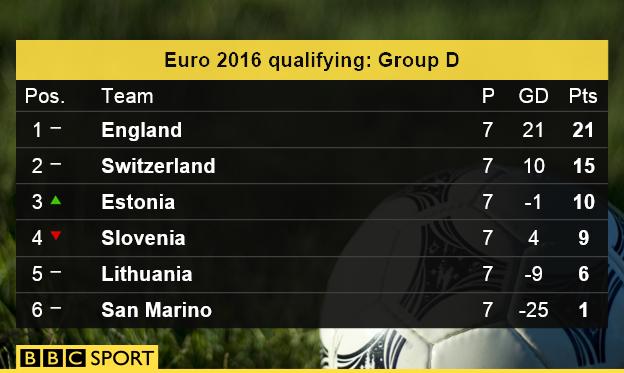 Well, they will definitely be there and, as the first team to qualify (hosts France apart) Hodgson has some time for experimentation in the final three qualifiers.

England will not travel to France among the favourites but there is some fine young talent in this squad in the shape of the likes of Barkley, Luke Shaw, Kane, Stones and, of course, Raheem Sterling, who was rested on Saturday.

Hodgson will hope they continue to develop rapidly over the next 12 months alongside established, experienced players such as Rooney.

This should mean England can travel with hope and optimism. But potential winners? That is a long stretch.

England striker Wayne Rooney: "It's a proud moment to equal Sir Bobby Charlton's record. My aim is to push on and try and help the team win on Tuesday and break the record.

"It would have been great if the record had happened tonight. Obviously the tradition of Wembley and to break the record at Wembley would be great."

England manager Roy Hodgson: "I am more than satisfied and we won it with a good margin.

"One or two who weren't in contention to play on Tuesday night have pushed their claims and Jonjo Shelvey deserves a mention."

'Hodgson will be delighted'

Former England midfielder Jermaine Jenas on BBC Radio 5 live: "There have been some decent performances from England. Ross Barkley stepped it up in the second half, Nathaniel Clyne bombed up and down the right flank and Jonjo Shelvey has hardly given the ball away.

"England manager Roy Hodgson will be delighted with his team's discipline, energy and professionalism."

Man of the match - Jonjo Shelvey