With the Women's World Cup party over, England's Lionesses and a host of other international stars now return to domestic duties for the second half of the Women's Super League One season.

Chelsea are top of the table, unbeaten in 2015 and on their way to Wembley on 1 August for the first-ever Women's FA Cup final to be held at the national stadium.

Arsenal are just two points behind their London rivals, with Notts County right behind them and early-season surprise package Sunderland lying fourth following their promotion to the top flight.

Liverpool, the defending two-time champions, are eight points from the summit and just four points above bottom side Bristol Academy.

With the same tally of points at this stage last season, the Reds then mounted a title-winning run, so with the competition entering its next phase there is plenty still to play for. 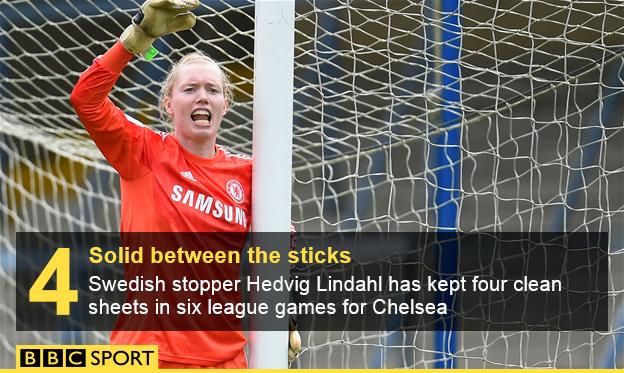 Season so far: Top-of-the-table Chelsea are unbeaten and boast the best defence in the division, having conceded just two league goals so far. They started 2015 with four consecutive league wins, before drawing their last two games before the World Cup.

On top of that, Emma Hayes' side have strengthened their attacking options during the international break with the signing of England striker Fran Kirby, the top goalscorer in WSL 2, from Reading. Put simply, they are the team to beat.

Bringing in the Sweden international goalkeeper, Hedvig Lindahl, will be a huge move for Chelsea. A few people blamed goalkeeping errors last season for them not quite making it over the finish line last year, and Lindahl has strengthened them in that department. They started the season as favourites and they are currently still my favourites for the title."

Did you know? Chelsea and South Korea forward Ji So-Yun won the PFA Women's Player of the Year Award in April.

Season so far: Pedro Martinez Losa's side are one of only two teams still unbeaten in the league so far in 2015 and sit two points behind leaders Chelsea.

After a relatively slow start - they draw away to Notts County before being knocked out of the Women's FA Cup at the quarter-final stage - Arsenal steadily improved week by week and enjoyed a vital away win over Manchester City before ending Chelsea's 100%-winning record with a hard-fought draw at Staines Town, meaning the title race remains wide-open.

Brown-Finnis's verdict: "Arsenal are kind of back to the Arsenal of old. They had a down time last season, even though they won the FA Cup. They have brought through some younger players and are really getting back to their former glory. For me they will push on and be one of the contenders for the title."

Did you know? Young winger Chioma Ubogagu has scored all three of Arsenal's away league goals so far this campaign.

Season so far: A four-match winning run just before the World Cup break helped the Lady Magpies climb to third in the table and reach their first Women's FA Cup final with victory over Everton at Goodison Park in the last four. The only side to beat Notts to date are league leaders Chelsea, who they next face in the FA Cup final at Wembley on 1 August.

Rick Passmoor's side are the most prolific scorers in the top flight with 12 goals, as Rachel Williams leads the way in the league with four, while Ellen White has netted six in all competitions. In total, Notts have had nine different goalscorers this season. 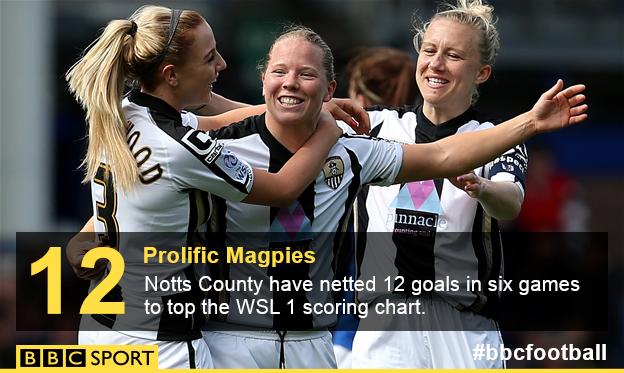 Brown-Finnis's verdict: "They brought in Laura Bassett, a star at the World Cup, and Alex Greenwood, who was influential in Canada, so they really added strength in depth this season. That is something Notts County should be proud of. They are into their first FA Cup final, which will be at Wembley for the first time, so what an occasion. It is all well deserved."

Did you know? England full-back Alex Greenwood has racked up five assists in the WSL this season, more than any other player.

Season so far: Sunderland manager Carlton Fairweather says his side were the 'surprise package' of WSL 1 during the first half of the season and it is hard to argue. Despite this being their first year in the top league, Sunderland have excelled - after winning three of their opening six fixtures, they sit fourth in the table and are just five points off the top.

The club strengthened their squad during the international break by bringing in Republic of Ireland striker Stephanie Roche and Norwegian goalkeeper Hilde Gunn Olsen. 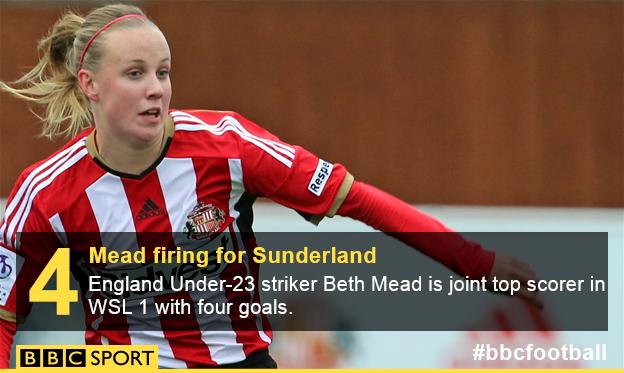 Brown-Finnis's verdict: "Sunderland have been the dark horses. Nobody gave them a shot. Some of their players have only gone full-time this season, after promotion last season, but they've proved themselves.

Did you know? New signing Stephanie Roche was voted runner-up in this year's Fifa goal of the year competition, known as the Puskas Award. She was only beaten by James Rodriguez's World Cup stunner for Colombia.

Season so far: Reigning champions Liverpool had a disappointing first half of the season and only picked up two victories from their opening five league matches. They do have a game in hand on Manchester City, but start the second half of the campaign in fifth place, eight points behind leaders Chelsea.

Manager Matt Beard admits that losing some big-name players at the start of the campaign cost them, but says they are in a positive mood after the international break. He also says the club have not given up on retaining their title but acknowledges that it will be a difficult task.

Brown-Finnis's verdict: "Liverpool are always there or thereabouts. This year will be their hardest test yet, to try to retain the title. They have not made the most convincing of starts. In games where, on paper, they should have won, they haven't necessarily got over the line.

Did you know? Liverpool forward Asisat Oshoala was voted as the BBC's first-ever Women's Footballer of the Year shortly before the World Cup.

Season so far: Despite making several high-profile signings at the beginning of the year, Manchester City struggled to put points on the board during the first half of the season. The club only managed one win and are sixth in the table, but have a game in hand on Liverpool.

Manager Nick Cushing added USA under-23 attacking midfielder Daphne Corboz to his squad during the international break in a bid to improve the team's scoring record after netting only three league goals in five games.

Brown-Finnis's verdict: "Man City are all full-time and it's starting to prove now that it is worth the investment they have put in. The set-up they have there is unparalleled. But, with that, they have good team spirit - it's not just about buying the best players. For me, they haven't quite played their best but they are still on a crescendo, so they'll be contending for the title at the end, even though they are third-bottom."

Did you know? Manchester City had disciplinary problems in the first half of the season, with England pair goalkeeper Karen Bardsley and midfielder Jill Scott both receiving three-match bans for separate violent conduct charges.

Season so far: Birmingham City's campaign started with plenty of fanfare after knocking defending WSL 1 champions Liverpool out of the FA Cup in their first competitive fixture of the season. Since then, however, they have failed to win a match, a run of four defeats in the seven games since. They are yet to hit the back of the net in the league at home and sit second from bottom in the table.

Brown-Finnis's verdict: "Birmingham have really struggled this season. They just haven't scored goals and are floundering at the bottom of the league, which is not where they should be having been in the Champions League last year."

Did you know? Birmingham City's poor run of form was compounded by the absence of England midfielder Karen Carney, who managed to make just three appearances before the nine-week international break.

Season so far: Inside seven weeks Bristol Academy were dumped unceremoniously out of the Champions League, parted company with manager Dave Edmondson and were left rock bottom of WSL 1.

But, while the Vixens are yet to win a match this season, the arrival of Scotsman Willie Kirk as manager has gone a long way to lifting hopes of avoiding relegation. In the two games since his arrival, Bristol are yet to lose.

Brown-Finnis's verdict: "Bristol were always going to struggle, having lost a lot of players before the season, and then having sacked their manager fairly early on. I have seen them play with great heart and determination since Willie Kirk came in. They have a new lease of life and have shown signs that they can survive in this league."

Did you know? Kirk signed seven players on Thursday's transfer deadline day in a thorough revamp of the squad. Among the new additions are Arsenal's Scotland international Caroline Weir and Equatorial Guinea striker Jade Boho Sayo, who joins from Spanish side Rayo Vallecano.