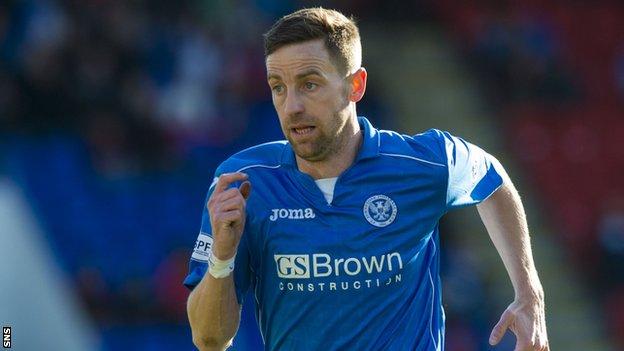 Playing in the Europa League group stage would be a bigger achievement than winning the Scottish Cup, says St Johnstone striker Steven MacLean.

"If we can make it that far [the group stage] it would be better than winning the Scottish Cup," he said.

St Johnstone have travelled more than 3,000 miles for the first leg before hosting Alashkert at McDiarmid Park next Thursday.

Should the Perth outfit progress, they will need to negotiate three further ties to secure a place in the group stage.

"The group stages are four rounds away," said MacLean. "We've got eight games to play before we can even think about that.

"But as a squad we're not looking that far ahead. We're just taking it one game at a time. If we can take care of this team then we will look to the next game. After that, you never know."

"It's a bit of a step into the unknown," said Wright of his opponents who finished fourth in their domestic league last season.

"We've watched a bit of them on DVD and it's hard to judge what kind of standard they are. We've done our homework and we're looking forward to it.

"They are probably quite like ourselves in the respect they don't score many; but then don't concede many either.

"They are like a lot of foreign teams in that they like to play out from the back, play it slow before speeding things up with a few quick passes as they try to open you up.

"As I say, we've done our homework and we just need to play the game as it comes.

"We've played in big games before and are experienced enough to be able to handle it."