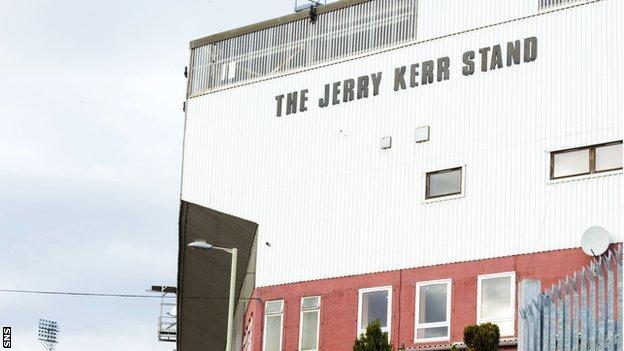 Dundee United have handed German goalkeeper Luis Zwick a two-year contract after he impressed as an amateur with their development squad.

The 21-year-old arrived last summer having previously played for Hertha 03 Zehlendorf in the German fifth tier.

But United goalkeeper coach Craig Hinchliffe said he could now battle for the number one jersey at Tannadice.

"He is one of three keepers at the club who have the opportunity to prove they merit the first-team jersey," he said.

And that leaves fellow Pole Michal Szromnik, who arrived from Arka Gdynia last summer and has made two starts so far, and fellow 22-year-old Marc McCallum, who has made one appearance, as the other goalkeepers on the books.

"We have chosen to not give out the '1' squad number because we have three goalkeepers all capable of playing in the Scottish Premiership and, over pre-season, one will prove to me they deserve the jersey," he told United's website.

"Luis fully deserves his contract. His story is fantastic and shows how determination and desire mixed with ability can achieve goals.

"He is an excellent technical goalkeeper - a modern goalkeeper if you like, fantastic with the ball at his feet - and has proved he has the mental strength to succeed."

United say that Zwick overcame an initial bout of homesickness and a language barrier to prove himself.

The goalkeeper said: "I have improved greatly in my time here and was aware that continued hard work and playing well would see an opportunity to move into the first-team squad.

"My target is to now play games, continue my development and make an effort to secure the goalkeeper's jersey for the first team."