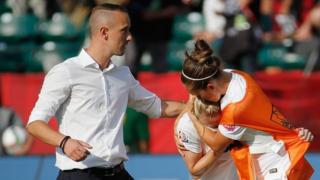 England go out of the 2015 Women's World Cup as they lose 2-1 in the semi-finals to Japan, with defender Laura Bassett scoring a dramatic own goal in injury time.

Mark Sampson's side looked on course to take the reigning champions to extra time after Fara Williams's penalty cancelled out Aya Miyama's spot-kick.

But Bassett diverted a cross over goalkeeper Karen Bardsley's head, the ball hitting the crossbar and bouncing over the line, seconds before the final whistle.

England will now face Germany in Saturday's third-place play-off, while Japan take on the United States in a repeat of the 2011 final.

You can catch up with all the best bits from each day of the 2015 Women's World Cup in Canada right here.

England toil as Pakistan chip away at tourists' mammoth 657

Did it cross the line? Germany out on dramatic night

'Germany bow out as fallen giant of world football'

'Revenge is motivation' for Ghana against Uruguay