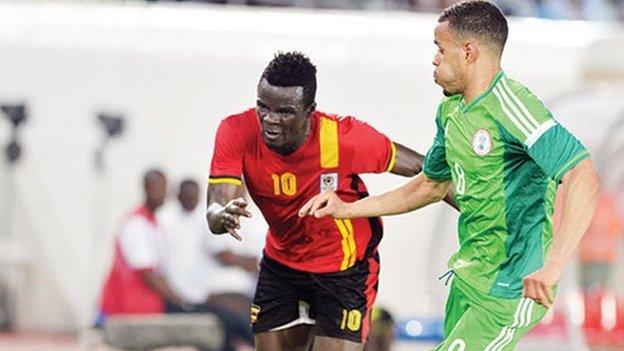 The 21-year-old signed a three-year contract with the Portuguese top-flight side last month, joining from second-tier club Sporting Covilha.

He earned the move after scoring 17 goals last season - even though Luwagga feels he underachieved - as Sporting Covilha just missed out on promotion.

Luwagga revealed he was drawn to Rio Ave, who finished 10th in the Premeira Liga, because of their style of play and the town Vila do Conde, northern Portugal where the club is based.

"It is not because they have other African players. But I want bigger challenges and I am sure it will not be easy because I need to work hard to break into the first team," Luwagga told BBC Sport.

The attack-minded player admits he faces a steep learning curve both on and off the field and says he thinks African players are also under pressure because of the high expectations placed on them by Europeans.

Luwagga feels African players have to live up to a reputation for being physically very strong, while he also believes opportunities are limited for East African players because their teams rarely qualify for the Africa Cup of Nations and have never reached a World Cup.

The youngster hopes his his experience in Portugal will help other Ugandans break through and earn a chance to play in Europe.

"I hope to brings back the professionalism I have learned from Europe even when I retire," he said.

His immediate ambition, however, is to play well in his first season for his new club - and eventually he wants to make his mark in Germany's Bundesliga or the English Premier League.

Born in the district of Wakiso, Kizito joined Uganda Premier League side Bunnamwaya FC (now SC Vipers) in 2009 at the age of 15. In his first professional season with Vipers, the team won the Ugandan Super League in 2010 - the first time in the club's history.

In the summer of 2012, Kizito signed for Portuguese second division side Leixoes where he scored several goals before joining Sporting Covilha in January 2014.

Two years previously he earned his first call-up to the Uganda national team and he has gone on to win three and he has since won three caps.

Luwagga is targeting a regular place in the Cranes team and hopes to play a part in the team's qualification campaign for the 2017 Africa Cup of Nations.

Uganda have not reached the finals since 1978, but Luwagga is optimistic about their chances of ending that poor run.

"We can overcome the other teams like Comoros, Burkina Faso and Botswana in our group," he said.

The Cranes beat Botswana 2-0 in their opening Group D match and will next travel to Comoros on 12 September.