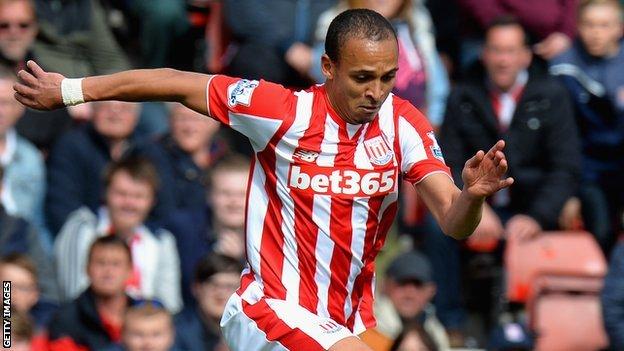 Nigeria international forward Peter Odemwingie has signed a one-year extension to his contract with Stoke.

The 33-year-old winger will remain at the English Premier League side until the summer of 2016, with the option of a further 12 months.

"I've enjoyed great support from everyone connected to the club and I am honoured to be given another opportunity to continue here."

A serious knee injury kept Odemwingie out of action for eight months last season and he only returned for the last five games of the campaign.

Odemwingie is eager to show the club - and the fans - how grateful he is for their help during a tough year.

"The fans make me feel at home and I would like to thank the fans who have continually supported me," he said.

"Everyone at the club stood by me during my tough period and I have a big chance to repay them in a positive way.

"Right now I've earned the contract and hopefully there could be a few more years after this because I love it here.

"This club is on the way up and it is a great time to contribute to the progress."

Odemwingie has scored five goals in 23 appearances for Stoke after signing in January 2014 from Cardiff City in a swap deal which took Kenwyne Jones the other way.

His form for the Potters earned him an international recall and he played for Nigeria at the World Cup in Brazil, scoring the winner against Bosnia-Hercegovina.

Previously Odemwingie enjoyed a successful three-year period at West Bromwich Albion scoring 15 goals in his first season at the Hawthorns and 31 overall in his time there.