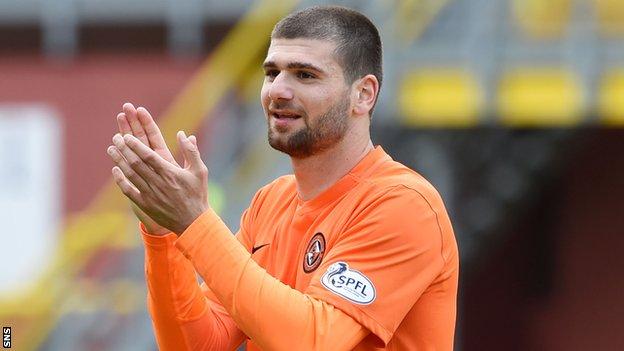 Nadir Ciftci has turned down Wigan after the League One club had agreed a transfer fee with Dundee United.

The 23-year-old striker, in the final year of his contract, has also been the subject of two offers from Celtic, which United rejected.

Ciftci's agent says his client is "flattered" by Celtic's interest.

Pierre van Hooijdonk, who played for Celtic, said: "Anyone would be interested [in Celtic] when you consider the size of the club."

Ciftci extended that contract at Tannadice by a further 12 months. However, he rejected the offer of another one-year extension in June, saying he wanted a "new challenge" in 2016.

"Our relationship with Dundee United is a very good one and we want to keep it that way," added Van Hooijdonk.

"We will just wait and see what happens over the next few days and weeks.

"At the end of the day the player always decides what happens in my opinion. But we are not having a big argument with Dundee United."