Irish Premiership side Crusaders sealed a place in the second qualifying round of the Champions League by beating Levadia Tallinn on away goals.

The former Linfield front man struck in the fourth minute but Levadia equalised midway through the first half through a superb free-kick by Siim Luts.

Crusaders will play KF Skenderbeu of Albania in the second qualifying round.

"Levadia were a full-time team playing in their national stadium, but they did not hurt us," said Crues manager Stephen Baxter.

"They scored with a wonderful free-kick but we had the better chances.

"We did not get a lot of decisions and just hung in and hit the bar with five minutes to go."

The victory was worth around £140,000 in Uefa prize money to the Irish Premiership title holders.

Levadia, on a great run in their domestic league with seven successive victories, were favourites to see off the visitors from Belfast.

But a fourth-minute goal by summer signing Carvill changed the complexion of the tie.

Carvill played a part in the 22nd-minute equaliser as it was his foul on Artur Pikk which led to the free-kick from which the hosts levelled matters.

Luts found the top corner of the net with a brilliant shot, Crues keeper Sean O'Neill getting a touch on it.

Crusaders weathered Levadia pressure early in the second half and as time wore on the Northern Ireland team looked like pulling off a famous result.

Indeed, Baxter's men almost won the game on the night with Heatley's shot from the edge of the box striking the crossbar in the 86th minute. 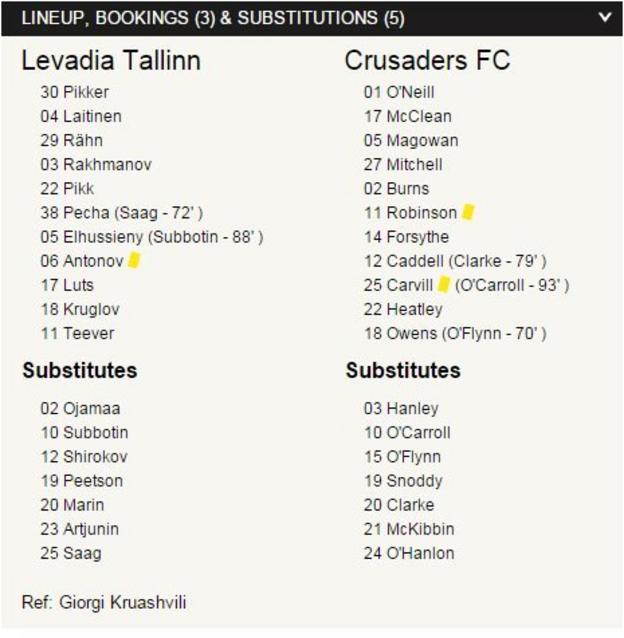