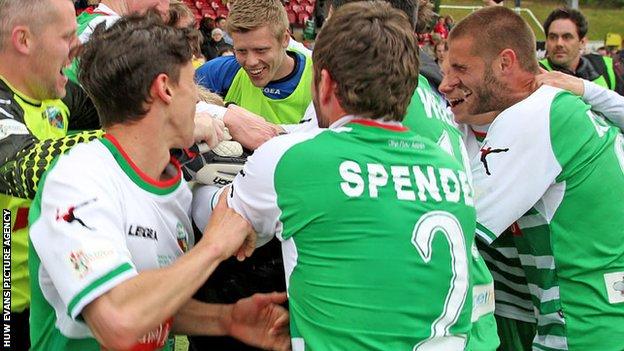 Mike Wilde scored a hat-trick as Welsh champions The New Saints swept aside B36 Torshavn in the Champions League first qualifying round.

His strike gave TNS a 2-1 win in the first leg, and Wilde's two first-half goals put the tie beyond the Faroese.

He completed his treble early in the second half to secure a second round tie against Hungarian club Videoton.

It is the first time the Welsh club have won both legs of a Champions League tie and their first two-leg win since the 2010-11 campaign.

Oswestry-based TNS, winners of the Welsh domestic treble last season, play the first leg of their second round match at home on Tuesday, 14 July.

Hat-trick scorer Mike Wilde told BBC Radio Wales Sport: "First and foremost the performance was what we wanted and the goals were a bonus. Even to grab one in the Champions' League is delightful but to get three is something special.

"We started really well. We had a plan, we had a remit and the lads stuck to it and got the reward - and now we go on to the next phase.

"I hope [I get to keep the ball] so I'm going to have to ask someone to grab for that for us - it would be good to keep that as a memento.

"We've had big occasions before against Liverpool and Man City and I was involved in those with TNS and and this is up there with that because you don't just get the occasion but we get the victory and we get the taste for it."