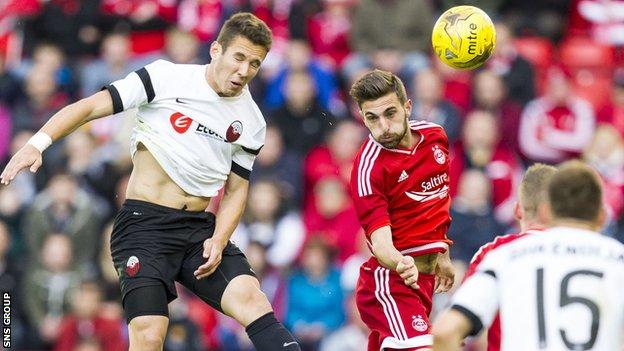 Aberdeen drew a blank with Shkendija at Pittodrie to reach the second round of Europa League qualifying on away goals.

The Dons survived a nervous finish to set up a clash with Rijeka of Croatia, with Danny Ward making a fine diving save to ensure a 1-1 aggregate score.

Graeme Shinnie and Kenny McLean threatened with shots in a good spell for the hosts before half-time.

And Peter Pawlett had a fabulous long-range strike tipped onto the crossbar in a game of few chances.

Manager Derek McInnes warned before kick-off that the opponents from Macedonia would be no pushovers and he was proved right.

Shkendija gave as good as they got for long spells and nearly pinched the tie as they pressed at the death.

It took a marvellous save Ward to deny Besart Ibraimi the goal that would have taken the visitors through.

Aberdeen made it to the third round of qualifying last year before losing to Real Sociedad, and McInnes wants to at least match that again.

But it will need a much-improved display against Rijeka, who are aiming to reach the Europa League group stages for the third season running.

The task was already tougher this time round as Shkendija were far superior to Daugava Riga, who were thrashed 8-0 on aggregate at this stage last term.

The Macedonians were technically gifted and physically strong and the Dons will be encouraged to have made it through without influential defender Mark Reynolds, who dislocated his shoulder in the first game.

McLean returned to the starting line-up and those two produced the Dons' best chances of a first half that started brightly for the visitors.

He sped clear of three challenges before setting up Armend Alimi at the edge of the penalty area but the midfielder slewed his shot well wide.

Fernan Hasani created a good chance for himself shortly afterwards but hit a shot that had too much elevation to trouble Ward.

Aberdeen gradually worked their way into the game but found it tough to trouble a well organised side.

They finally produced a flurry of action in the few minutes before the break with the impressive Shinnie the catalyst.

His pace was a real asset in both defence and attack and the former Caley Thistle captain latched on to a sublime Jonny Hayes pass on 41 minutes.

His angled drive finally forced Marko Jovanovski into action with a vital block and the goalkeeper was then relieved to see McLean's shot from 30 yards fly narrowly wide soon after.

The second half followed a similar pattern, plenty of controlled possession from both sides without penetration.

The one moment of anxiety came when Ward spilled a free kick midway through the period but he was bailed out by his team-mates.

Pawlett replaced McLean and came closest to winning a tense match when he let fly from 30 yards and his dipping shot grazed the keeper's fingers before smacking back off the crossbar.