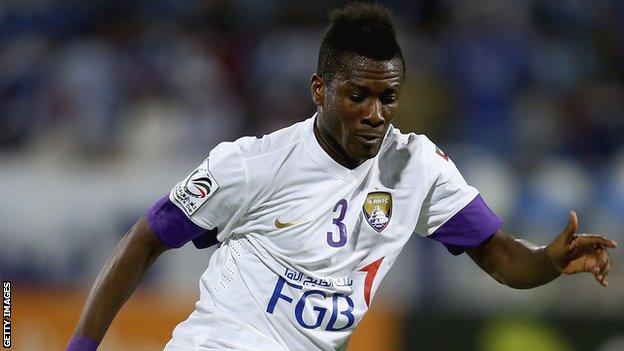 Nigeria's Emmanuel Emenike is set for a loan move to Al Ain in the UAE to replace Ghana striker Asamoah Gyan, who is moving to China.

Al Ain have accepted an offer for Gyan from Shanghai SIPG, who are coached by ex-England boss Sven-Goran Eriksson.

The 29-year-old arrived in China on Wednesday to undergo a medical and finalise a contract with Shanghai SIPG.

Emenike is due to arrive in the UAE on Thursday to complete a season-long loan from Turkish side Fenerbahce.

The deal will include an option for Al Ain to buy Emenike at the end of the loan.

The 28-year-old, who only scored 4 league goals in 27 matches, has a lot to live up to - during his four years in the UAE Gyan scored 95 times 83 appearances.

He also won three domestic league titles and was top scorer in the Arabian Gulf League three times as well.

As he left the club Gyan was handed an award for his dedicated service to Al Ain.

"I am lost for words," he said on his official website.

"This club will always have a special place in my heart no matter what happens in future.

"I want to really thank the entire Al Ain club and its fans for the support they have me in my time here.

"At Al Ain we were able to achieve a lot of things and I tell you this club will remain in my heart forever.

"It is however time to embrace a new challenge and hopefully this new challenge will be as successful or even better than my time here at Al Ain."