Claudio Ranieri's return to English football as Leicester City boss, 11 years after he became the first managerial casualty of the ruthless Roman Abramovich regime at Chelsea, was a shock to many and has certainly divided opinion.

Former Tottenham manager Harry Redknapp reckoned the 63-year-old Italian - who famously embraced his 'dead man walking' tag towards the end of his reign at Chelsea - was fortunate to get a Premier League job in England.

But many have also praised the work he did during four transitional years at Chelsea and his two-year spell with Monaco, and point to the experience he has gained while managing some of the biggest clubs in Europe. 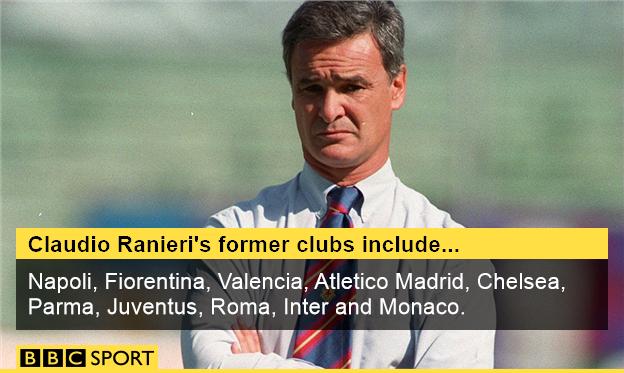 CHELSEA AND LEICESTER PAST

"He was a bit of father figure. In general he was very thorough and at the time he was little bit of a novelty in English football. There weren't as many foreign coaches in the Premier League and I think some of his ways gave him a little bit of an advantage.

"His communication skills weren't great because he couldn't speak the language. That was understandable but didn't help and everybody was basically living a little bit on edge whether they played well or not. That contributed to a lot of the players feeling a little bit insecure under him.

"A lot of people will say that is good and it keeps people on their toes but if players play well they should know they will be in the team.

"That type of tinkering was not really conducive to continuity and sometimes it came across that he had a few problems with the bigger players in the team if they didn't swim in the right direction.

"He relied a lot on his coaches, who were very good. He let them do their stuff and would always oversee everything until it came down to the tactics when he really took on a hands-on role.

"I remember a time at Derby when we weren't playing well and he came in and waited for three or four minutes before he said anything. He didn't like to get overly emotional because he believed that would be detrimental to the side.

"Claudio suffered a bit because he was new to English football and maybe didn't quite understand the culture. He was different and a decent manager but I didn't really think he had it in him to get a side to win trophies.

"But that may suit him. His remit will be to keep Leicester up, so I do think being here before and having the experience he has had will give him a good perspective on how to approach this job.

"I don't think he is the right manager in terms of getting the side to battle but I think you will see a profound change in the way Leicester play. The owners seem to want them to play in a different way that is much more attractive on the eye."

"I was very surprised he was appointed. There was lots of talk about Martin O'Neill and Neil Lennon going back to the club where they are truly loved. But Claudio's experience and some of the clubs he has managed is phenomenal.

"From what I know of his time at Chelsea, from speaking to the likes of John Terry, he is a very strict manager and very much a disciplinarian, who knows the game inside out. He had a very successful period at Chelsea and some people have forgotten that. He was a bit unlucky. It was part and parcel of the way Roman Abramovich was running Chelsea.

"If I was a player at Leicester still I would be excited given the players he has worked with in the past - very excited. But for the next manager at Leicester, the job in hand is stabilising the club. I don't think they are looking to win things yet. If they can be a mid-table team then he will be doing a fantastic job.

"He will have funds but won't have ridiculous money. But Leicester finished the season as good as anybody last season and the squad is quite strong so they only need to strengthen in two or three positions."

"He's very experienced, and has been in lots of different situations. Above all he is someone who is generally unfazed and unflustered by some of the challenges ahead. If it's a big personality, he approaches it like he's seen it before and he knows what to do and how to get through it.

"We often make a mistake when we compare people to their past and things that happened 11 years ago. He is a different manager to the guy he was in 2004 when he had that unique job with Roman Abramovich just coming in at Chelsea with limitless funds.

"Along the way he has been in different situations. He is more difficult to rattle than before, having dealt with some very tricky high-profile, high-pressure situations at Juventus, Roma and Monaco. That will stand him in very good stead.

"He is not the sort of manager who gets involved in transfers. He generally describes the profile of the player he wants and leaves it up to the club to deliver. My understanding was that Nigel Pearson was more of a top-down manager but with Ranieri that will not happen. He would not deal with agents or other clubs with signings. He would approve them but would not be driving negotiations.

"If you define success as Leicester staying up then I think Ranieri can deliver that. If you are looking at long-term growth and rebuilding then maybe that is not it. What you are getting above all is a very good pragmatist who can handle difficult situations."

"I saw him work at Monaco for a couple of very successful seasons and I was impressed. He joined in the second division and got them promoted, winning the league title and in their first season in the top flight they were competing with Paris St-Germain up until the last month of the season.

"Generally he was very well perceived in France and it was very surprising and no-one really understood why he was sacked at the end of his second season when Monaco finished second.

"He played very positive and very attacking football. OK, they had Radamel Falcao and James Rodriguez, but even against Paris St-Germain they played to win and did not sit back and defend.

"He does demand a lot from his players and had a fall-out with Rodriguez when he left him out when he was unhappy with the player's workrate. But after that he became a key man and got the move to Real Madrid.

"I see him as good man manager and a man who likes to attack and play his football in the right way.

"He wasn't afraid to drop James Rodriguez and other players and chop and change formations. Since being at Chelsea, when he got the Tinkerman nickname, football has changed a lot and I don't see it as a particularly big issue. He is an intelligent man and will pick his players on merit; he won't worry about reputations."

FOXES CLOSE TO THE GROUND

"I think the reaction will be mixed. He has an international reputation which appealed to the owners and he has Premier League experience. Some fans will always want former Leicester players taking over which I don't think always works out - remember Frank McLintock from many years ago?

"Things will have moved on since he managed in England but he has a vast amount of experience and it's better to have some experience of the Premier League than none - which was the case with some of the names bandied about and that was causing alarm.

"One of the interesting things will be the playing style and if that will change. I would like to see us not change too much in what we are doing because the players are used to it and we have a consistency in approach."

"Nigel Pearson had created an army at the King Power Stadium with all parts, eventually, coming together to win seven of nine vital games to ensure they remained among the elite this term. Mr Ranieri's biggest challenge is walking in as the new ranking officer and winning the trust of his troops.

"The test of coming back to the Premier League for the first time since 2004 will be a big one as the division has moved on significantly.

"But the style of play created by Pearson, the players, and staff was unique. Claudio doesn't have long to familiarise himself with his playing staff, particularly the glut of strikers, and form a steady side for a generous start which sees Sunderland, West Ham, Tottenham and Bournemouth as their opening games."

"Claudio Ranieri? Really? Ranieri is clearly experienced, but this is an uninspired choice by Leicester. It's amazing how the same old names keep getting a go on the managerial merry-go-round."

"Ranieri, good manager but for me not Leicester. If you play for the Foxes you need someone you can relate to as a manager. O'Neill, Pearson are managers the players can relate to. I'd have gone back to O'Neill or Lennon. It will be a relegation battle whoever was manager. Big name, bad choice in my opinion. Time will tell. Hopefully I am wrong."

"Ranieri is a nice guy, but he's done well to get the Leicester job. After what happened with Greece, [who lost to the Faroe Islands under him] I am surprised he can walk back in to the Premier League. He wasn't one of the managers I thought would have a chance of getting that job. I never ever thought about him taking over at Leicester."