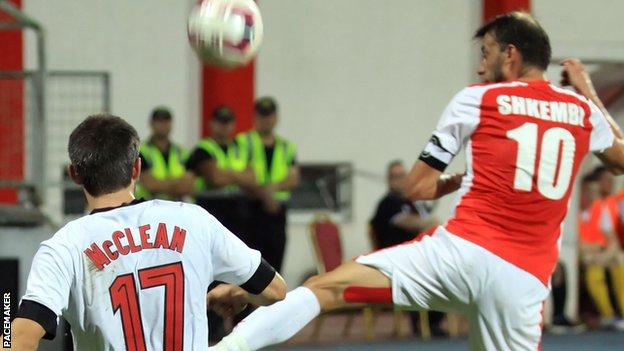 Irish Premiership champions Crusaders were beaten 4-1 in Albania by Skenderbeu in their Champions League second qualifying round first leg.

After first-half goals by Bakary Nimaga and Hamdi Salihi, Jordan Owens pulled back an away goal for the Belfast side on 48 minutes.

Salihi struck his second goal of the night seven minutes from time.

The two late goals leave the Crues with a massive task in next Tuesday's home leg.

They arguably deserved better in Albania after battling bravely for the entire game.

The Northern Ireland champions were relatively untroubled in the early stages before falling behind on 15 minutes after Berisha set up Nimaga to score despite Sean O'Neill getting a hand on to the shot.

But Crusaders regrouped and went close to levelling just on the half-hour mark as Owens headed a Craig McClean free-kick inches wide.

However, within three minutes the Albanian champions doubled their advantage as Salihi prodded home after the unlucky O'Neill had been unable to hold a deflected shot.

But Crusaders looked right back in the tie three minutes after the interval as Owens superbly headed a Billy Joe Burns cross to the net.

Marko Radas hit the Crusaders woodwork on 60 minutes but Crusaders then produced pressure of their own as Caddell was denied by Skenderbeu keeper Orges Shehi.

But a neat build-up set up Berisha to restore Skenderbeu's two-goal advantage on 76 before Salihi's second strike late on surely put the tie beyond Crusaders's reach.

However, the Belfast side will earn in the region of £525,000 from their European endeavours even if they bow out next week. 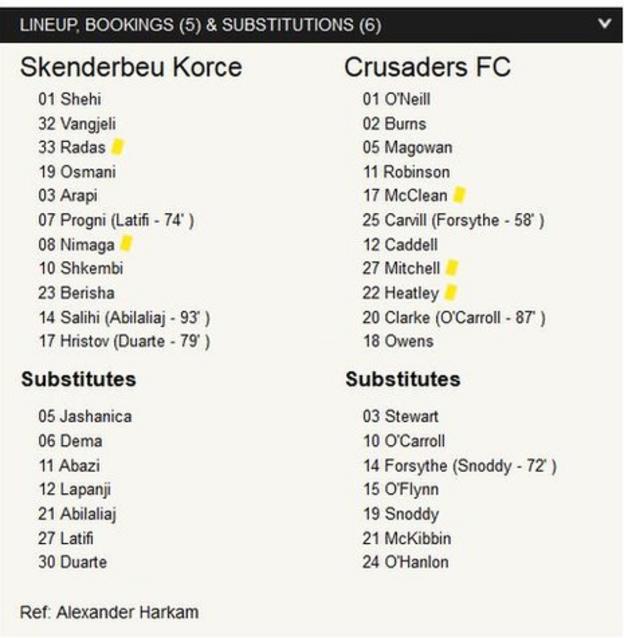