A year on from Brazil 2014, World Cup winners Germany are stuttering their way towards qualification for the 2016 European Championship.

A shock defeat by Poland and a home draw with Republic of Ireland have punctuated their six group games so far, prompting concern from fans and media.

Despite their less-than-smooth campaign, BBC World Service looks at how Germany can get it right in France next year.

The talent never dries up...

That is three big holes to fill - the trio amassed 354 caps between them - but former Chelsea forward Andre Schurrle, now at Wolfsburg, believes others are ready to step up. 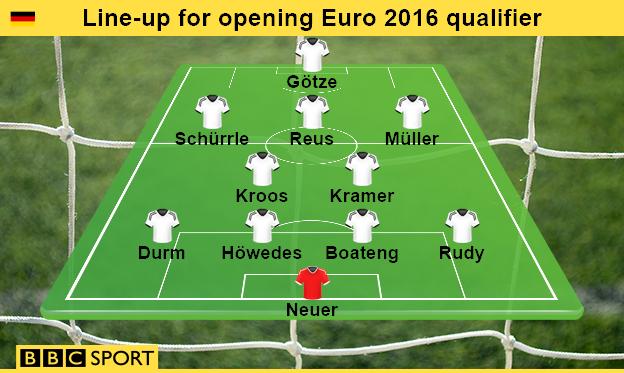 "The guys who retired were very important, so we have to find a new system with new players coming in," he told World Service's Sportsworld programme.

"But I'm very confident because we have great young players and we can do something big in the future as well."

So who might these youngsters be? Here are four:

They have a coach who knows what works...

In March, Joachim Low extended his contact with Die Mannschaft until the end of the 2018 World Cup in Russia.

Appointed in 2006 after two years as Jurgen Klinsmann's assistant, the 55-year-old has won 82 of his 122 games in charge.

"One of his biggest strengths is he has a fantastic social competence," said Clemens. "He pays credit to the ones who really have the expertise.

The Germans chose to stay at a purpose-built £25m (36m euros) training camp near a remote fishing village during the 2014 World Cup.

The German Football Association also shipped 23 tons of luggage and equipment for Germany's stay in Brazil, including mountain bikes, billiards and table-tennis tables and even dartboards.

"It was really important for us to think about every specific detail of the tournament," said team manager Oliver Bierhoff.

"It was so important that the players came together as a team, that they relaxed and that they get the power back to perform in the next game.

"I was so sure that Campo Bahia would make the difference in the atmosphere of the team. We were really like a family."

They look for every little advantage...

According to a report on technology website GeekWire, Low's decision to bring on match-winning substitute Mario Gotze towards the end of the World Cup final was not based simply on a gut feeling.

The German coaching staff made use of crucial data gathered from small devices worn by players in practice.

That information indicated Gotze was the man to help break the deadlock - which he did with just seven minutes remaining in extra time.

They are never satisfied...

The German Football Federation is building a new football academy in Frankfurt at a cost of £63m (89m euros).

Construction work will start in 2017, with the venue ready for occupation by the end of 2018.

According to Bierhoff, the country has to "think about how to educate our coaches and players even more".

Low adds: "We need optimal conditions to continue playing at the very top in the future. That applies for the youth teams, the women and my team, as well as for the education of our coaches.

"We shouldn't relax now that we've attained our fourth star."

They have a history of winning...

Former Germany goalkeeper Bodo Illgner, who won the World Cup in 1990, says it is not easy to stay on top but thinks the current team can.

"It's very difficult to repeat, new players are coming in, the team has been shaken up," he told Sportsworld.

"If you see the age of the players, of course there's still room to win another title, but everything has to be perfect at this right time."

There is a zero tolerance for failure...

When Germany went out of the 2000 European Championship, finishing bottom of their group with just one point, it prompted a radical overhaul.

The German Football Association, the Bundesliga and the clubs decided they needed to produce more technically gifted homegrown players.

"One big problem in professional football is that there is no consistency in working together," said Clemens.

"A big strength of the German FA is that we have a clearly developed structure that is of course linked to the head coach but not in total.

"If someday Joachim Low leaves the German FA, there will be a structure and an idea on how we want to play football which is clearly settled."

They have amazing self-belief...

Their qualification record may be a little patchy, but Low seems unperturbed. He was filmed filing his nails during the win over Gibraltar.

Afterwards he gave the following prediction to the media: "In the autumn, we will get the necessary points to qualify."

"I remember looking over at Bastian, who had given everything," said the 24-year-old Wolfsburg player.

"He really gave his life in this game. When you have someone like him on your team, you just want to do the same."

Qualifying is easier than ever... 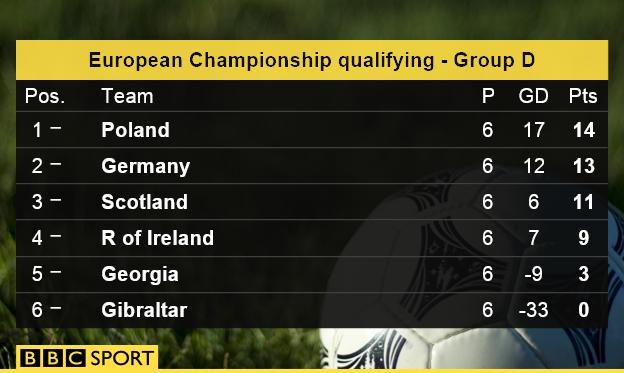 Germany are second in Group D, a point behind Poland, after four wins, a draw and a defeat in their six games.

Even a 7-0 defeat of minnows Gibraltar in their most recent qualifier failed to convince the doubters, with Frankfurt media organisation FAZ describing the first-half performance as "lethargic".

With a home game against Poland followed by tricky away games against Scotland and the Republic or Ireland, further pitfalls await.

But qualification is easier than it has ever been, with 24 teams reaching the finals, up from 16 in 2012.

And their main rivals are struggling...

So far, the only team to have guaranteed a spot at next year's European Championship are the hosts - France.

Slovakia and England, who both have 100% records in qualifying after six rounds, look like joining them.

So do Wales, Iceland and Croatia, who all top their respective groups.

But the big hitters of Spain, who are the reigning European champions, the Netherlands, Italy and Belgium have all been unconvincing.

Spain trail Slovakia in Group C, the Netherlands lie third behind Iceland and Czech Republic in Group A, Italy are second to Croatia in Group H, while Belgium are behind Wales in Group B.